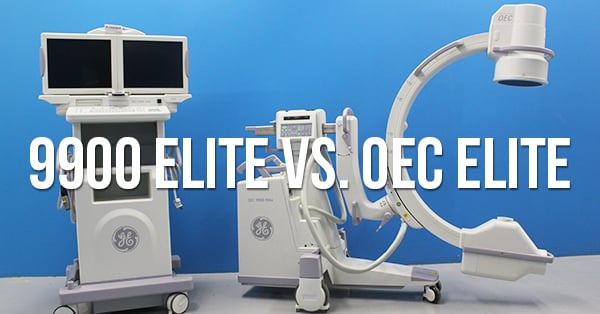 In early 2016, GE released their newest line of OEC C-arms and unveiled their CFD system, the OEC Elite. Along with the new flat-panel system, OEC released an upgraded version of their tried-and-true II-based systems.

The value of the CFD is well known, so the question then becomes, where does the new II-based OEC Elite system fit in? How does it compare to the previous II-based OEC 9900 Elite system that has been the standard in the industry? Below is a quick comparison of the two systems and where they find their place.

How Are They Similar?

Let's first look at the similarities between these units. They have the same "C" in terms of movements and dimensions. Both systems are II-based with 9 and 12-inch options. Both have 1K x 1K CCD technology and the same power specifications for the generator. Penetration power is not an issue with either model.

From a software perspective, the OEC Elite comes standard with the ESP package, which is also available on the 9900 Elite package.

How Are They Different?

The 9900 Elite system has been a trusted solution since its release. However, the newer OEC Elite system gave the previous 9900 unit a facelift. A few upgrades include:

It’s clear that the II-based OEC Elite offers several advantages over its older relative, the OEC 9900 Elite, and at a relatively modest increase in price when either is purchased brand-new. If your equipment budget has room in it to purchase a new C-arm, the investment could be well worth it.

If your budget is more modest, the 9900 Elite is commonly available on the secondary market at far lower prices. The 9900 may not have the very latest features, but is still dependable, capable, and something of a gold standard within the typical C-arm install base.

Devinn LoVette is an Account Executive at Block Imaging. In his role, Devinn finds and creates opportunities for Block Imaging and our partners to give a second life to medical imaging equipment. Outside the office, he is a youth pastor at City Life Church, an avid athlete, and a high school basketball coach.