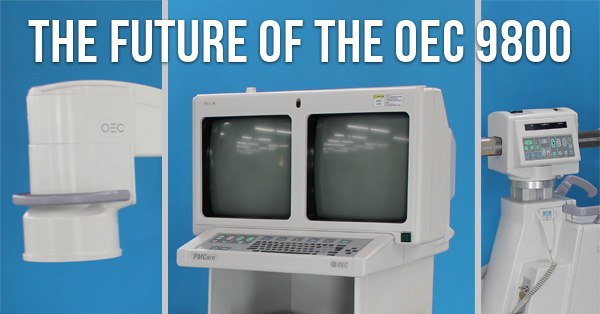 As we continue into the twentieth year since the OEC 9800 C-arm was brought to market, many folks are beginning to ask if the model might be nearing end of life status and how long we believe support for it will continue. When these questions come up, we maintain a position of confidence in support, parts and service, and technology for the 9800 for years to come. The following are a few of the reasons why.

The quick answer is that the OEC 9800 is not even close to being declared end of life. The FDA requires equipment manufacturers to provide support on their equipment for at least seven years after they sell it. Because OEC was still selling new 9800 C-arms as recently as 2017, we know manufacturer support can't go anywhere until at least 2023. Based on the longevity of its predecessors, the crossover of key components with other OEC models, and the enormous install base still in play, our prediction is that there is still a lot of life left in the OEC 9800.

The 9800 is the best selling C-arm model of all time. With thousands of units made, the supply of replacement parts is huge- as is the number of engineers who are familiar with performing service on the system. Even if OEC were to pull support after 2023, third-party parts and service organizations would have the ability to keep 9800s in the field going strong for years after.

The 9800 can have its hardware upgraded in a number of ways that keep it in step with the technology of later models and bring the 9800 new life. Flat-screen monitors, image storage capacity, USB image transfer, and digital detectors are all on the table as improvements that can be added to a 9800; all of this while retaining the same familiar and dependable interface users know.

While they no longer sell new 9800 C-arms, OEC continues to sell used units through their Goldseal refurbishment line. While a resale purchase doesn't carry the same FDA-required seven years of support, the very fact that OEC is selling 9800s means they intend to stand behind them for the foreseeable future.

If you own an OEC 9800 or have been considering buying one we see no evidence that the model is going anywhere in the next 5-7 years. Sales from GE and third parties will continue, and access to replacement parts, service personnel, and upgrades will remain strong.

If you'd like to know more about purchasing an OEC 9800, our team is ready to help. Click the button to ask questions and/or get a price.

How to navigate the eventual end of life phase for your Hologic Discovery DEXA, why it won't be ...