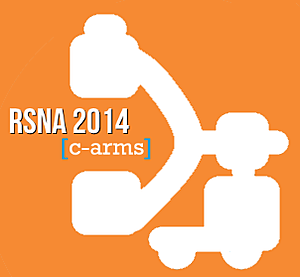 With just a few more days before RSNA 2014 kicks off, I sat down with our resident C-arm expert, Chris Sharrock, to find out what to look out for on the show floor for one of our top modalities.

Chris gave me the top three C-arm topics he'll be keeping his eye on next week in Chicago.

"I'll be spending some time at the Orthoscan booth this year. Although Orthoscan is still a relatively young company, they have grown their market share quickly."  Chris attributes much of this growth to Orthoscan "advancing their technology faster than anyone else in the space; particularly in the area of flat-panel, digital mini C-arms."

If you are a podiatrist, orthopod, or extremity specialist, Chris recommends you make the Orthoscan booth one of your stops to see the latest and greatest in mini C-arms, as well as where the future is headed.

Chris also expressed excitement at seeing some of the changes in the overall c-arm market. "When I think back to RSNA 2013 and where pricing was for the most-requested items like [OEC] 9800s, Siemens Avantics, and Philips Pulseras, it was encouraging to see these flagship models becoming available at much lower prices. It will be interesting to get a broader feel for how far this has continued over the last year," he said.

With this downward trend in pricing, Chris is looking forward to the secondary C-arm market improving its ability to provide the benefits of top models to a wider base of facilities.

Prior to the release of the 9900, all OEC C-arms came from the factory with CRT monitors. Chris and I talked about recent developments that allow the 9900's predecessor, the OEC 9800, to be upgraded with flat LCD touchscreens.

Chris told me, "OEC has been offering this for about a year, [but] it's now available from third parties at a much lower price point. The ability to extend a second chance at life to your existing equipment while, at the same time, making some great improvements in image quality is something I think folks will be interested to learn more about."

Will You Be There?

If you're planning to attend RSNA 2014, we'd love to talk C-arms with you! Stop by the Block Imaging booth, #3129 hall A, to chat with Chris or any of Block's other modality specialists.