What Is 'Time of Flight' PET Scanning? 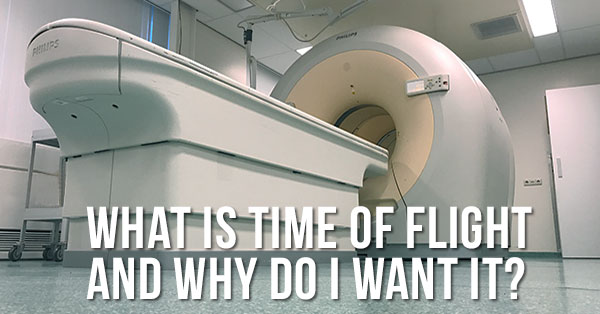 As with all modalities of imaging equipment, PET scanning is gradually moving in the direction of greater and greater diagnostic accuracy. For PET in particular, the biggest step in that direction of the last decade has been the development and proliferation of time of flight technology.

What Time of Flight Is

All of the photons released during the course of a PET scan strike the detectors at almost the same time; almost being the key word. They are usually differentiated by measuring the attenuation, or fall-off, of their signal. This attenuation occurs naturally as the positron works its way through body mass. The highest attenuation happens at the thickest parts of the anatomy. Using a lot of computers and software to analyze the attenuation (or fall-off), radiologists and oncologists are able to get a very good idea of where the positron annihilation event and, therefore, the targeted mass or anatomical region is.

We said above that "almost" is the key word when describing time of contact between PET detectors and the bombardment of positrons they receive. Time of flight (TOF) technology takes measurement a step further. Using measurements of pico-seconds, TOF measures not only the distance and attenuation of photons, but adds to the algorithm the actual time difference between the detection of photons released during coincident events to more accurately identify the distance from the annihilation event to the detector.

Why You Want Time of Flight

Simply put: time of flight offers higher image quality for more accurate detection of masses and lesions- especially in large patients.  A more accurate system gives you better information, and better information makes it easier to declare a more definitive diagnosis and pursue a more specialized treatment plan. While many PET scanners that don't have TOF can still create quality images that show radiologists what they need to see, systems with TOF offer a diagnostic advantage.

Which PET Equipment Has Time of Flight

The "big three" manufacturers (GE, Siemens, Philips) all offer TOF now. Philips was first, on their Gemini TF scanners in 2006. Siemens began offering TOF as an option in 2010, and GE followed a couple of years later on their PET/MR. Because the Siemens and GE offerings are so recent, if you are looking for TOF on the secondary market, you will find mostly Philips TF systems at this time. You can browse average pricing for PET equipment with and without TOF here.

Time of Flight is one of those technologies that can take an entire imaging modality a step forward. Like other technologies before it, there will probably come a day when TOF is a standard feature on PET equipment, but in the interim, if you're wanting to upgrade your capabilities, you'll need to seek the feature out.

If you're ready to start the conversation, our team is ready to help. Use the button below to tell us about what you're looking for and receive an equipment quote.