What Is an MRI Quench? 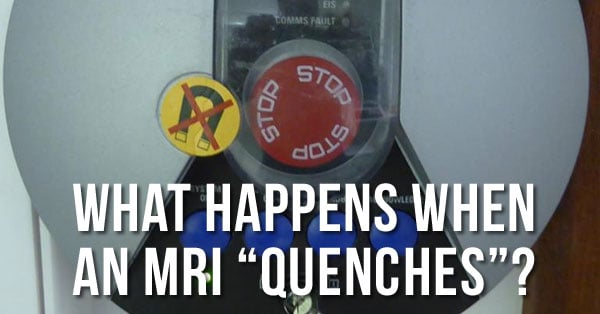 If you’ve been in an MRI facility, you've probably noticed a large red button in a conspicuous place. Did you feel the urge to press it? Did you wonder what would happen if you did? Maybe, but you'd NEVER actually press it – because you are not 7 years old, right? What you were looking at was, essentially, the MRI’s “Off” button. Turning an MRI off can be done in a couple different ways: one that's slower, easier on the machine, and a whole lot cheaper, but the big, red button is by far the more exciting. It even has a cool name: "quench". If you're unsure of what happens when an MRI quenches, this blog is for you!

A Quench in a Nutshell

Superconductive, high-field MRI systems are basically giant electromagnets. The majority of them operate at 1.5 Tesla, which is 15,000 Gauss, or about 30,000 times the earth’s magnetic field. This is enough magnetic power to lift a car (which is rarely necessary in a clinical setting) and produce miraculous diagnostic images without using radiation. The material that makes these magnets so powerful is liquid helium, which takes the resistance in the coil windings around the magnet down to zero. This allows the electrical current to flow continuously as long as (and this is key) the liquid helium is maintained at a steady negative 452.2 degrees Fahrenheit.

So back to the two ways to turn an MRI off. You can either remove the current or remove the helium. Removing the current involves a magnet power supply, a hideously expensive piece of equipment that does only two things: Adds the current to turn the magnet on and removes the current to turn the magnet off. By “off” we mean "take the magnetic field down to zero". This is called a “ramp down” and, unsurprisingly, when current is added it's called a “ramp up”. If you recall, the helium keeps the resistance at zero, which means that once that current is added during the ramp-up process, all that electricity just keeps on moving through the wires unimpeded... forever... unless, of course, the system quenches.

A quench occurs when there is a rise in the magnet's temperature resulting in a loss of superconductivity, i.e. the resistance in the electrical current described above is no longer zero. This causes a chain reaction: ever-increasing resistance causes more and more heat, which causes the liquid helium to boil into gas, which causes pressure to build until there is a sudden, dramatic, and expensive, release of helium gas. Fortunately, all MRIs are equipped with a helium “quench pipe” which vents it out of the building and safely into the air.

There are two main types of quenches, and both are triggered by the red button. A customer of ours actually pushed his once, out of curiosity. And no, he was not 7 years old. This button is primarily for safety purposes. In some rare cases, clear signage is ignored and metal objects like mop buckets, oxygen tanks, etc. get sucked into the bore of the MRI. These are very difficult to remove while the magnet is at field. And, if a patient is somehow pinned inside, an emergency push of the quench button can be a lifesaver. The button artificially heats the magnet and starts the chain reaction described above.

There is also a procedure called a “planned quench” that is sometimes used by an engineer when an older and no longer usable magnet is being decommissioned. It saves the time and expense of a formal ramp down, but is sometimes frowned upon by hospital staff. Not always though – we have had occasions where the hospital not only gave permission, but also asked if we could do it after hours so the staff could gather outside to watch. So, a quench can sometimes be fun!  A piece of advice though:  venting helium looks very similar to smoke, so if you ever have this procedure done be sure to alert the local fire department for obvious reasons.

Unfortunately, quenches that aren't triggered by a user or an engineer can happen too, and they are rarely fun. These occasions, where the MRI quenches on its own, can be caused by a leak, ice in the magnet, a failure in the magnet's cooling system, or even critically low helium levels. These are seldom dangerous, but the loss of helium represents a serious (five-figure!) expense, and there is potential for damage to the magnet.

Hopefully, all this quench talk provided some good information without creating any undue worry. Once a magnet is up and running, a quench is relatively rare. The best way to avoid them is to ensure that your system is properly serviced, regular preventative maintenance is performed on both the MRI and the cooling system, and all safety procedures are followed closely. If your facility doesn't have a service partner to help with that, our team would love to talk with yours. Use the button below to tell us how we can help.