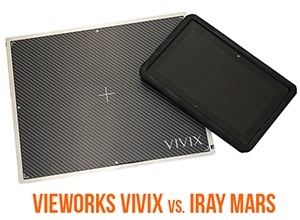 Given the proliferation of digital X-ray detector use over the last seveal years, it's not surprising to see a corresponding proliferation in DR panel makes and models. With all these options comes the question: "Which one is better for me?"

To help you learn more about answering this question, we've compared two models side-by-side to highlight their technical differences and what each panel has to offer X-ray users. Keep reading for more details on the Vieworks Vivix-S 1417W and the Iray Mars 1417V.

Have a DR panel model in mind already? Click here to submit a request and get a quote.

When comparing the speed of use between two DR panels an advantage for one panel will probably be only a matter of seconds. This might not seem significant but, when those seconds are multiplied by the hundreds or thousands of scans performed with a given panel, the time can add up to significant hours being saved. That being said, the Vivix-S is definitely the faster of these two panels.

AED: Having AED means that, when powered on, a Vivix panel is always ready to respond to the X-ray generator. The Mars 1417V, on the other hand, uses a feature called Auto Trigger. In an Auto Trigger system, a signal from the acquisition workstation is sent to the panel to activate the detector cells so they're ready to receive X-ray. This signal and cell activation add a small window of time to the acquisition process.

The image quality category, too, goes to the Vivix-S. Images captured with a higher density of pixels are clearer. A higher density of pixels is achieved when the pixels are smaller. The pixels in the Mars 1417V are 150 micrometers while those in the Vivix-S are 140 micrometers. In terms of resolution, the Mars 1417V is rated at 2.8 lines per millimeter (lp/mm) while the Vivix-S is rated at 3.5 lp/mm, an 80% advantage.

The Vivix-S is once again the leader, weighing in at 6.8 pounds, while the Mars 1417V weighs 7.9. Like the seconds cumulatively saved by using a quicker panel, the effort saved with a lighter panel, stacked up over hundreds of movements, becomes considerable.

This category is a victory for the Iray Mars 1417V. These panels typically cost somewhere in the low twenty-thousands while Vivix-S panels fall into the high twenty-thousands. The purchase savings amount to about 20%.

In performance, the Vieworks Vivix-S 1417W is a clear frontrunner over the Iray Mars 1417V. Quicker operating speeds, lighter design, and (most importantly) superior image quality are all advantages any user will appreciate. The Iray is a less expensive panel up front by 20% but, given the benefits just mentioned, we believe the Vivix panel is ultimately a better value.

If you have more questions about Vieworks, Iray, or other DR panels, our team is ready to start the conversation. Use the button below to tell us about your project and how we can help!

A video review of the VXvue digital X-ray panel software from Vieworks.

If you're about to choose your next X-ray DR panel, here are some key differences between Gadox ...