The New Section 179 Outlook: Best Ever? 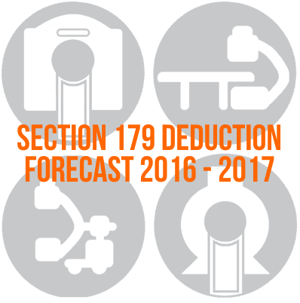 Back in December 2015, the Section 179 deduction was raised to up to $500,000 on qualifying purchases under $2,000,000. The deduction rate (up from a drastic forecast the previous year of a mere $25,000) was retroactive for equipment purchased and installed in 2015 and will continue for purchases made throughout 2016. The 50% bonus depreciation, available in previous years, was also reinstated and kicks in once expenditures hit the 500k mark.

All of this is great news for anyone who has purchased or will purchase in the last bit of 2016, but what about 2017? For those who have followed Section 179, the deduction has changed quite a bit over the years and seems to be perennially on the table for more change. Well, now there’s more to the story that could make right now through December 31, 2017 the most advantageous Section 179 scenario yet.

The Deduction Is Permanent

In what is probably the biggest news for Section 179, Congress has made the 500k deduction limit permanent. This puts an end to the fluctuations we’ve seen historically, making Section 179 a dependable part of subsequent budgeting processes.

With the biggest potential for savings in play via Section 179, there are two types of key modalities that will be especially worthy of purchasing considerations in 2017. 1. Big-ticket systems: Because cath labs, CT scanners, and MRI machines are among the more costly imaging modalities, they represent the highest dollar amounts in potential savings.

2. Digital X-ray detector panels: In other legislation, the Consolidated Appropriations Act will introduce reimbursement cuts (20%) to studies processed on X-ray film in 2017, followed by cuts to studies processed with CR readers (7%) in 2018. A purchase in the next 12 months is the savings trifecta: avoid cuts, claim the newly-secured deduction, take advantage of the last year of 50% bonus depreciation.

For an even better idea of what you could save, you can click the screen shot to the right to try Crest Capital's Section 179 calculator. This tool shows the deduction and depreciation savings on equipment at all price levels.

Whether you were planning to purchase imaging equipment in the next year or ride things out with your current equipment a little longer, the latest developments in Section 179 make sooner a little more appealing than later. If you have more questions about Section 179, the Consolidated Appropriations Act, or pricing on any modality of imaging equipment, we're happy to help. Use the button below to tell us about your project!