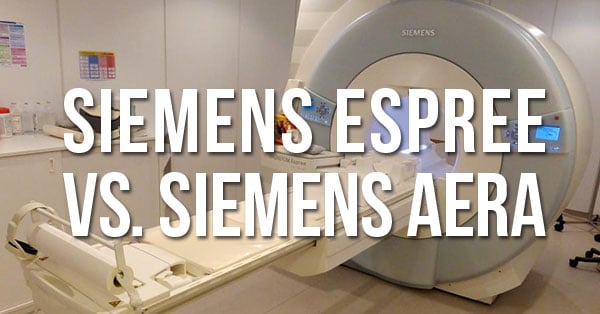 The popularity of Siemens wide-bore magnets has been unparalleled in the marketplace since 2005. The Siemens Espree became the preeminent option when 70 cm and closed-bore magnets were discussed in the same conversation. Now, the Espree's "younger sibling", the Aera has become a hot topic among MRI buyers. But how do they stack up? Is this incremental improvement, or a sea change for wide-bore systems? To shed some light on that, below we'll compare the Siemens Espree and the Siemens Aera.

Both the Espree and the Aera have 70cm bores offering greater patient comfort. They both utilize Total Imaging Matrix technology that allows you to combine coils to image multiple regions of the body simultaneously. This eliminates having to change out coils and reduces total scan time. TIM also allows you to image over a larger area without moving the patient. Finally, the Espree and Aera both run on the Syngo platform, which Siemens uses across all their modalities.

While these features are notable common ground, the Espree and Aera seem to have more differences than similarities. Here are a few that stand out.

All the Aera's components for transmitting and receiving RF signal are mounted right at the magnet, while the Espree's are in the equipment room. This means the Aera has less cabling (just a fiber optic cable between the magnet and equipment room) and less noise, which improves signal quality.

The Aera comes in two table configurations: roll-away or floor-mounted. The Espree has just one table type, a fixed table that hangs off the front of the gantry and makes no contact with the floor.

There's not a dramatic difference, but it should be noted that the Aera has a mildly higher gradient class.

Similar to the earlier Siemens Avanto, the Aera shims to a spherical magnetic field, as opposed to the elliptical field found on the Espree and many other magnets. This field shape betters suits the Aera for full-body scanning, as the field more closely aligns with the overall shape of the human body.

The Aera and the Espree have different covers and overall appearance. The Aera is more square in shape, with three corners. Portions of the gantry are also lit with the Illumination MoodLight feature, which allows the user to cycle through three soothing colors. At a given time, an Aera could appear in its base white or MoodLight green, blue, or red. The design of the Aera also did away with the stripes found on the Espree and other Siemens systems of its generation.

The coil options of these two systems differ substantially. While both use TIM, the Espree uses an older version of the technology. The TIM 4G Aera uses coils with up to 64 independent RF channels. That goes up to 204 when you combine coils. The increase in channels allows for faster acquisition and better image quality.

As you might have guessed from its overall newness, the Aera isn't widely available on the secondary market yet. We've seen a few slip onto the market in Europe, but they are a rare bird elsewhere.

If a facility is interested in upgrading to an Aera for less, there are some Esprees out there that have an upgrade called FIT. With the FIT upgrade the Espree OR122 magnet is kept, but the original electronics are replaced with Aera electronics.

If you're leaning toward a Siemens product for your next MRI solution, their platform is respected and popular. Between TIM technology and 70cm bore diameter, either of these offerings would serve you well in a wide variety of applications, with maximum patient comfort. For those can be patient and you have more budget flexibility, the Aera will get you better image quality. If your hope is to upgrade within the next few years, however, the limited availability of the Aera on the secondary market makes the Espree the better pick right now.

Regardless of the MRI make and model you're looking for, our team looks forward to serving you with equipment and service in the season ahead. Use the banner below to ask questions or request quotes.

Having trouble finding a used Siemens Verio? We have 4 reasons why the Siemens TIM Trio 3T might be ...