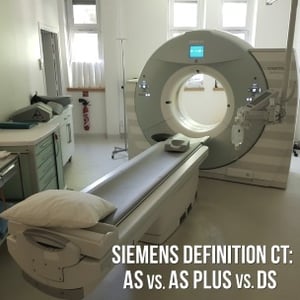 For the last 15 + years Siemens' Sensation series was their flagship CT scanner product. It came in 4, 10, 16, and 64-slice iterations and kept the company in step technologically with their peers. Now, however, Siemens has done away with the Sensation series and replaced it with the Definition series.

While it's wonderful to see a reliable manufacturer continue to push their tech and their performance forward, the rise of a newer product line frequently means a whole new set of naming conventions and feature configurations for those of us who sell, serve, purchase, and use it to learn. Because there are more details packed into the name of each Definition series scanner than there ever was with the Sensation series, we're going to take the next few paragraphs to clarify what makes each Definition scanner different from the other members of its family.

The Definition Dual Source (DS) was the first model in the Definition series and is quite different from the rest. The DS has two  Straton MX tubes- hence, dual-source. It has incredible image quality and fast scan times. Some call it a 128-slice CT, but technically it comes in 64 x 2 or 32 x 2 varieties. To clarify: while a dual-source CT scanner is capturing twice as many anatomical slices as a single source, those slices comprise two data sets taken from the same coverage area, making dual-source technology a benefit to scan times rather than image resolution.

The major drawback of the two-tube configuration is the service cost involved in replacing two proprietary tubes. At over $200,000 for each Straton MX, a service contract for a Definition DS is not for the faint of heart.

The Definition Adaptive Scanning (AS) comes in 20, 40, or 64-slice varieties, or it can come as a Definition AS+, which is a 128-slice scanner. Regardless of the slice count, the hardware across the series is nearly identical. The concept behind the AS sub group was a unique one: if you can only afford a 20-slice or 40-slice scanner right now, a simple field upgrade at any time can move you up to a 64 or 128-slice.

Definition AS scanners are the most popular among the Definition family, as they have a lower cost of ownership owing to their single source (one tube) and upgrade path. The tube used in Definition AS machines is a Straton MXP. Though they are different from the tubes found in the Definition DS (i.e. not interchangeable) Straton MXP tubes are still over $200,000 to replace. But at least there's only one of them, right?

The Siemens Definition Flash is similar to the Definition DS with two tubes, but it also has two 128-slice detectors, making it, like the DS, what some would call a de facto 256-slice scanner. This makes for some of the fastest scans on the market (0.28 second rotation) and incredible resolution.

Like the DS, the drawback to the Flash's incredible speed and resolution is its service costs. With two tubes, upkeep on a Flash can run very much on the steep side.

The Siemens Definition Edge is a single source, 128-slice scanner that offers the same 0.28 second rotation as the Flash. It achieves this, in part, with Siemens' TwinBeam Dual Energy technology. This allows the Edge to acquire two data sets without an increase in radiation dose. In terms of upkeep costs, a user can expect the Edge to fall in the same tier as it's single-source brethren from the AS subgroup.

Hopefully, the distinctions above will give you some clarity as you approach scanners from the Siemens Definition series. Whichever model you may be considering in particular, you can be certain the technology is leading and the service costs will tend toward the higher end of the spectrum. As always, striking the balance between clinical capability and operating expense will come down to your facility's individual circumstances. 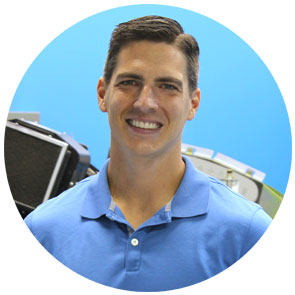 Paul Crawford is the Vice President of Dealer Solutions at Block Imaging. In addition to his role here, he is also a husband and a father of three. Paul believes the biggest value a business partner can provide is a partnership built on trust and strives to earn that trust with transparency in every conversation, project, and transaction he’s a part of.