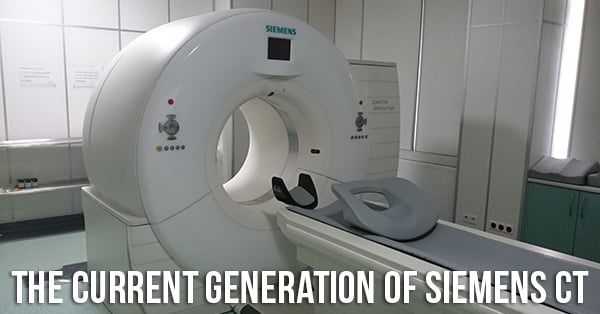 Over the past few years, Siemens has gained significant market share among CT scanner manufacturers. We believe the primary reason for this is the ways they’ve continued to improve on their innovations and overall product quality across every price point. Their current generation of CT scanners is no exception. But, while availability of these systems is rare in the secondary space, we do still have quite a few conversations with buyers about them. To help keep all you other buyers out there informed about the market, we've compiled a quick summary of what the latest models in Siemens' Somatom line have to offer.

This is that latest and greatest from Siemens. How much does a Somatom Force cost? If you have to ask, you can’t afford it. The Force is a dual-source scanner, so it has two tubes and two detectors (96 rows each) and is able to obtain a cardiac image in a quarter of a heartbeat. On top of this incredible speed, the Force boasts amazing resolution and low radiation dosage.

The Flash is also a dual-source scanner with two tubes and detectors. It offers acquisition speeds of up to 458 mm/sec, which may eliminate sedation needs in some patients, and breath holding in others. Like the Force, two detectors and tubes make service costs on the scanner quite expensive.

The Definition AS was and is, a great option for customers who aren’t certain of their future needs. What makes the AS unique, is that it comes in an AS 20, AS 40, AS 64, and AS + configuration, and can be upgraded in the field at a predetermined price. That being said, the upgrades rarely make sense financially, but were a strong concept, nonetheless. On their side of the deal, offering the upgrade allowed Siemens to connect with everyone from small imaging centers, all the way to hospital ER's with what was essentially the same scanner. The AS, is a single-source scanner (one tube and one detector), making it a good deal cheaper to service than dual-source systems, although the tube is proprietary and still on the high end.

The Perspective comes in 128, 64, 32, and 16-slice variations. It is marketed as the "most economical" scanner in its class. Its economy comes with a trade-off of course- it has a smaller detector. smaller tube cooling capacity, and slower rotation speeds than the Force and the Definitions series.

The Somatom Scope is similar to the older Emotion series; small, air-cooled, entry-level scanners. They are typically 16-slice, but can be upgrade to 32. They come in a Power version (with Dura 422mv tube and 50kW generator) and they come in the standard version (Dura 202 mV tube and 26kW generator). If you've never used Siemens scanners before, the Scope is most comparable to the GE BrightSpeed series.

The GO comes in four varieties: Top (128-slice), ALL (64-slice), UP (32-slice) and, Siemens go Now (16-slice). All of these varieties are operated with a tablet about the size of an iPad for better workflow and easier set up.

With features like those we mentioned above, it's no wonder why Siemens' market share continues to grow, and why folks continue to ask about their most recent scanners. When they ask, we make the following recommendations:

If your facility's current equipment stable is serving your patients, techs, and physicians well, you might be looking for an upgrade right around the time these systems begin to emerge on the secondary market, that is, 3-5 years from now. If it must be late-model and it must be Siemens- sit tight.

If, however, you're looking for an upgrade sooner than later, the secondary market can support you immediately with affordable systems from the previous generation of CT scanners by Siemens and other major manufacturers like GE and Philips. Our team is ready to help you make a great pick for your needs and your budget. Use the button below to tell us about your upgrade project and how we can be of assistance.

If you're looking for a late-model CT scanner, here's a quick overview of GE's Optima CT scanner ...