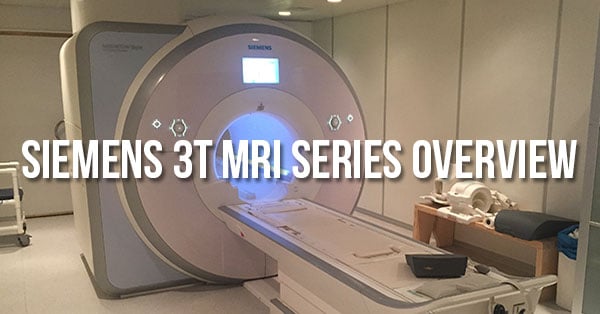 For the last fifteen years, Siemens has been a leader in producing high-quality 3T MRI systems. In that time, they've brought seven 3T models to market: the Vida, Lumina, Skyra, Prisma, Verio, Spectra, and Trio.

Seven models in fifteen years is an impressive list but, as a buyer sifting through options on the pre-owned market, it can be a bit confusing too. To help bring some clarity to your search, we'll compare these Siemens 3T MRI systems below and shed a little light on where each of them stands out.

Block Imaging is primarily a refurbished equipment seller and this is primarily a refurbished equipment blog so, for the sake of simplicity, let's reduce this list: The Vida and Lumina are quite new (just received FDA clearance in the last year or so), so it will be several years until they begin to appear on the secondary market. If you're looking for a pre-owned 3T system, it's probably best to cross these off your list for now.

The earliest 3T system that Siemens introduced was the TIM Trio. This system looks very similar to Siemens' Avanto and Espree systems and has a 60cm bore size. The magnet is not zero boil-off, but its gradients are powerful, at 45 amplitude and 200 slew rate, and it comes with up to 32 RF channels. If this is your entry into 3T MRI, it's important to note that acquisition cost will be much lower for the Trio than the other Siemens 3T's and, if a more robust system is needed later on, it is upgradeable to the system we will discuss next: the Prisma

Introduced in 2013, the Siemens Prisma 3T is also a 60cm bore system. Unlike the Trio, it includes zero helium boil-off technology. Along with some of the strongest gradients available on the market (80 amplitude and 200 slew rate), it incorporates some of Siemens newest innovations- the much faster TIM 4G (with up to 128 RF channels), and DOT (a new user interface that allows personalization of MRI scans according to patient needs). The Prisma also includes TrueForm Technology, which produces a cylindrical magnet homogeneity, as opposed to the typical elliptical. This corresponds better to the human body and helps to minimize “shading” effects (common in 3T imaging) to enhance image quality. Also worth noting, the Prisma includes TrueShape, which allows the technologist to selectively “highlight” regions of the body, seeing them with an enhanced, smaller field of view not previously possible.

To back up for a moment, why a 60cm bore? Isn't 70cm the trend now? While it's true the industry is moving toward 70cm bore size to maximize patient comfort, the smaller bore size will always be inherently more stable with a more homogeneous field. With a 3T, this is especially important in conducting research studies – something this unit is especially well-suited for.

The final 60cm 3T we'll cover is the Siemens Spectra, introduced in 2012. Like the Prisma, this system is zero boil-off and includes TIM 4G (with up to 24 RF Channels), DOT, and TrueForm. The Gradients are less powerful at 33/125, but also draw far less power. According to Siemens, this gradient configuration, along with other power-saving technologies on board, allows the Spectra to have a usage cost up to 18% lower than typical MRI scanners.

The Spectra is also much easier to site than other Siemens 3T's – especially in locations with space limitations. The magnet weight is half that of the Prisma and its overall footprint is smaller than the Prisma or Trio, allowing for faster installations.

Next we'll cover the 70cm bore models, starting with the Verio. Like its predecessors, the Verio has a zero boil-off magnet. Along with the Skyra, it's the most popular Siemens 3T on the market- they're perhaps the two most popular from any manufacturer).

The Verio was introduced around the same time as the 1.5T Espree. The overall appearance of the Verio is similar to the Espree and the 1.5T Avanto and, although it didn’t originally come with DOT onboard, it can be added- and many Verio units on the market already have it. Like the Trio, it can handle up to 32 RF channels and has the 45/200 gradients. The biggest differentiator between the Verio and all the 3T's before it is its 70cm bore.

Finally, we come to the 3T Skyra. The Skyra isn't widely available on the secondary market yet, but is perhaps the most “asked for” 3T system. It truly represents the best of all worlds, combining the best features of all the above units: 200 slew rate, 128 RF channels, DOT, TIM 4G, TrueForm, and TrueShape- all with a zero boil-off (no fills for 10 years), 70cm Bore magnet. The newer design makes it instantly recognizable against its contemporaries and predecessors.

Even with the list winnowed down to five, there's still a lot to know about the Siemens 3T family. The specs and features above have hopefully increased your technical understanding, but for even more clarity, here's a little application:

If you'd like to know more about 3T MRI systems, from Siemens or any other manufacturer, we'd love to help. Click the banner below to start the conversation and find the best MRI system for your needs.

Having trouble finding a used Siemens Verio? We have 4 reasons why the Siemens TIM Trio 3T might be ...