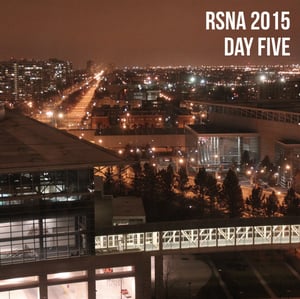 Today was the last day for exhibitors at RSNA 2015, but before the doors closed, the badges came off, and the business suits were traded in for buisness casual, the Block Imaging team managed to squeeze in some more quality time with providers, buyers, and leaders in radiology.

Here are our closing thoughts and final takeaways from the final exhibition day of RSNA 2015 at Chicago's McCormick Place.

Each year when we recap our experience at RSNA, we make a point of talking to members of our team that are attending for the first time so that we can place their fresh perspective alongside that of our longer-standing, veteran attendees. This year, our Campaign Manager, Emily Sandelands spoke with us about the balance of technical and personal content being featured. On the more inveterate end of the spectrum, our President, Josh Block and our President of Parts and Service, Jason Crawford brought us some closing remarks from their time here at McCormick Place

Spending at least a day or two at the annual RSNA gathering continues to be one of the best ways for anyone with ties to the radiology field or the imaging equipment industry to stay informed about emerging technology, patient care strategies, the effects of policy on health care providers, and opportunities to grow practices and companies alike through partnerships.

If you didn't make it to the gathering this year, be sure to browse our recaps from earlier in the week for interviews with RSNA speakers, highlights from exhibitors, and plenty of photos capturing the atmosphere here in Chicago.

The Picture of the Day

Many of us don't think about it but, in a way, RSNA starts about five days before any of us get there.

The picture to the right is what's going on at RSNA right now. As exhibitors and radiology professionals abandon the south and north exhibition halls, an army of tradespeople and a fleet of cherry pickers and fork trucks take the floor to disassemble and remove hundreds of intricate booths - reversing the process many of them began before Thanksgiving.

Only when the halls are bare do you realize the massive amount of effort it takes to create the polished final product we enjoy all week. The teardown process can only be described as a complete transformation, effectively "hitting the reset button" on McCormick Place to make way for their next big gathering.

A look at what's happening at the exhibits and in the classrooms at RSNA 2015 in Chicago. Part 1 of ...

Recaps and highlights from day three of RSNA 2015 in Chicago. Part 3 of 5.