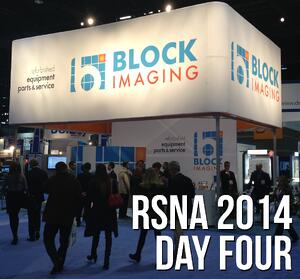 All of RSNA 2014 has been packed with opportunities to grow product knowledge and build relationships with others in the imaging field, and day four was no exception, especially in the area of field service and replacement parts. A quick poll among our team members yielded the following as some of the top takeaways from today's time on the floor.

I spoke with Stephen Loomis, Block's Account Executive of Service, about the discussions he's been having over the course of the show and learned that 2015 will be a year of expanding service capabilities for us. "We've been meeting with many of the companies that we partner with and all of them seem to be tackling the next year with big plans to do new things in service, parts, and engineering. We have plans along those lines as well and it creates a trickle-down effect that provides our service customers with a product that just keeps getting better," he said.

In terms of the big service plans for Block Imaging that Stephen mentioned, one of the biggest that will shape the coming year is our unveiling of Service Window. This set of web tools is designed to simplify communication between service customer and service provider by putting you in touch with your service rep, your equipment history, and your uptime forecast through a central online hub. It's been exciting so far to bring Service Window into our service discussions and hear firsthand the ways people predict it streamlining their equipment upkeep and reducing the stress associated with downtime.

Later on, I caught up with Chad Seelye, Vice President of Parts Sales to chat about what's new in the parts world at RSNA 2014. He said, "The most significant topic I've been able to talk through with people coming to the booth has been mitigating risk, cost, and downtime with an in-house parts inventory."

Chad is pleased to have been able to use this week's meetings as a chance to raise awareness that Block Imaging's parts inventory is wide (covering all modalities) and current with many late models. "Some of the folks I talked with assumed that most of our parts are sourced from other providers, when exactly the opposite is true." He went on to comment on the advantages of this fact saying, "Speed of play is important when a customer needs a replacement part. Because we can generally cut out the sourcing process by shipping directly from our own warehouse, we can move that much faster to meet the need in the field."

Chad summed up his overall message to RSNA with this: "Relationships being strengthened on the floor this week are bringing new ways of building inventory and managing it more efficiently. In 2015, it will be simpler than ever to get the parts you need, when you need them."

Watch the clip below for interviews with the Block team and Dr. Syed Zaidi of RadHelp about how the technology and content of RSNA 2014 are shaping a better patient care landscape for the coming year.

Pic of the Day

Today's pic is of the world's smallest nuclear camera. Our Marketing Coordinator, Lauren Olin volunteered to stand by and provide you with a sense of proportion. 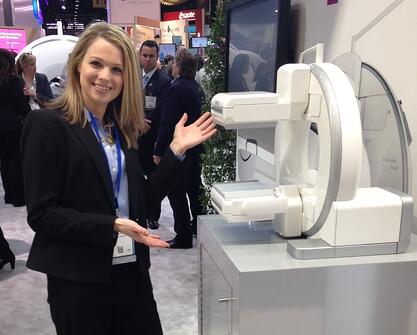 Before you have a Zoolander moment (What is this? A nuclear camera for ants?), we're just kidding. With an exhibition hall this packed a few things needed a scale model stand-in.

Check back tomorrow for the conclusion of our time on the floor at RSNA 2014!

If you're coming into this series late, be sure to see what you've missed over the week so far: