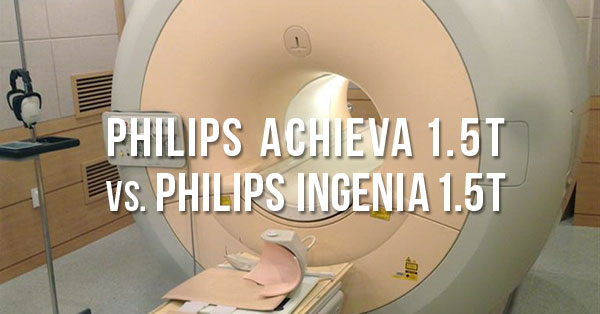 Every day, our team has the privilege of helping medical professionals find the MRI equipment they're looking for and, increasingly, the name they're after is Philips.

The mainstay equipment type in MRI is most definitely the 1.5T closed-bore magnet. As facilities seek to fill this important space in their imaging stable with a Philips system, the two models they most often have in mind are the Philips Achieva and the Philips Ingenia. Below, we'll compare the Achieva and the Ingenia to help you better understand their features and the value each system brings for buyers on the secondary market.

The Achieva 1.5T has been a solid and reliable performer for Philips since the early 2000’s. Many units from the earliest production run are still in use today and they continue to enjoy widespread demand. Replacement parts are plentiful, independent service options are excellent, and an upgrade path exists if one is needed.

The Achieva (like the Intera before it) uses the F2000 magnet with a 60cm bore. Although the F2000 is not technically a zero boil-off magnet, it is nonetheless very efficient, with typical boil off of approximately 1% a month, needing refills only about every 3 years.

If a provider you're considering operates in another country, it's worth noting that the F2000 can often be shipped internationally at much lower cost, as it boils off helium at a much lower rate than other magnets when it is off power. It can often be topped off with helium and shipped by ocean as opposed to costly air transport.

Achieva 1.5T systems come with a wide array of whole-body software options, powerful gradients (typically 33mT/m amplitude and 150 slew rate, but up to 66mT/m and 180 slew rate is possible), and RF channel options of 8, 16, or 32ch. The combination of a somewhat lower market share, efficient (but not zero boil-off) magnet technology, ease of shipment, and a relatively high install base means that the Achieva is a great choice for those looking for an MRI scanner that offers solid performance at a low cost of entry.

The 1.5T Ingenia was introduced in 2010 and was the first all-digital MRI. Ingenias are still rather rare on the secondary market. This is likely because they are substantially different than other models, and their users remain satisfied with their performance. This rarity brings a con with it, however: third-party service options for the Ingenia are relatively few and many users are limited to more costly OEM service.

The Ingenia also has powerful gradients (up to 45mt/m and 200 slew rate), but where it really shines is its digital technology.  Unlike any other system available on the secondary market today, the Ingenia is a truly “RF channel independent” system. What does this mean? Well for starters, it’s a completely new set of coils. In a typical MRI (the Achieva included), the coils are analog. They pick up the signal from the patient and this analog data is then reconstructed into an image. With the Ingenia, the analog-to-digital converter is inside the coil itself, where the signal is highest. The system receives all this signal through one fiber optic cable, regardless of the number of elements in the coil, making the number of RF channels (8, 16, 32 in typical systems) irrelevant. This also vastly simplifies the architecture and allows for fewer components, lower power consumption, and perhaps most importantly, improvement in the signal-to-noise ratio by as much as 40% (according to Philips). This essentially means better image quality and faster speeds. This technology is known as dStream and, while it's not widely available on its own yet, the possibility of future upgrades for Achieva systems exists.

The Achieva and the Ingenia bring separate strengths to the table to benefit users. If you’re looking for a reliable, proven system with wide availability of parts and service, low helium consumption, and a lower initial cash outlay, the Achieva 1.5T is a good choice for you. If, however, you place higher value on streamlined architecture, zero boil-off, speed, and image quality, and you have the latitude in your budget for OEM service, the Ingenia is a good pick.

Whether you ultimately choose an Achieva, an Ingenia, or an MRI scanner from a completely different manufacturer, our team is ready to help you find the best fit. Use the button below to describe your needs and get a price quote.

How to Restore Water Pressure on Philips Brilliance CT Scanners

How to restore water pressure in a Philips Brilliance CT scanner.