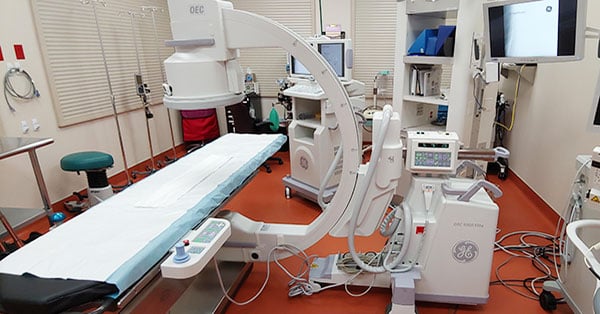 Like their non-motorized counterparts, the OEC 9900 MD and 9800 MD have an awful lot in common. But, also like their non-motorized counterparts, they differ in a few significant ways. To make things simple for those of you considering either of these models (or any other motor-driven C-arm on the market) we'll break down the differences below so you can choose the very best system for your site's needs.

Just like the similarities carry over between standard 9800 and 9900 systems, so do the differences. Basically, all the differences found on the 9900 MD can be found on any kind of 9900- with one exception, which we'll get to in a minute. For now, here's the rest:

UPS Option- A temporary back up in case of power failure. If a failure occurs, the system will have about 18 minutes to complete study

Real-Time Subtraction- 9800 C-arms also feature digital subtraction, but in the 9900 line, the feature can be used in real time.

Enhanced Tube Housing Cooling System- A plus for longer studies and improved wear on the tube anode.

Monitor Configuration- The most obvious and, arguably, most meaningful difference between the 98 and 99 lines. 9900 C-arms come with flat-screen monitors on an articulating boom arm. The monitors are brighter, have higher contrast, and don't experience burn-in. The boom arm allows a great deal of flexibility in positioning.

There is a difference between 98 and 9900's that you'll only find on the MD's: a Super C system with a 12" II is only available in an MD configuration. 12" 9800 Super C systems were manufactured in both manual and motorized versions.

If your facility has some budgetary headroom, or if you specialize in vascular work, the 9900 MD could be an excellent addition to your equipment stable. The combination of the remote joystick and the articulating monitor arm offer the very highest degree of positioning flexibility.

If you're on a tighter budget or work in a specialty best served by a 9" II, the 9800 MD is a better choice.

Compare the performance and features of the OEC 9800 MD c-arm. Find out what sets it apart from ...