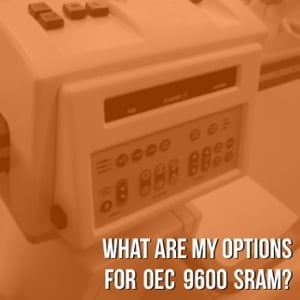 Problems with your OEC 9600's SRAM card and SRAM backup battery can leave your C-arm stalled at boot-up and stricken with the dreaded "Checksum" error- or worse yet: the never-ending rotating "arrows". When this happens, people want to find a solution that is both inexpensive and readily and quickly available- and we certainly don't blame them.

As an independent provider of imaging equipment parts and service, we're well aware that after-market, third-party, or non-standard parts can frequently offer comparable performance to their OEM-standard counterparts at a more affordable price point. In some cases, however, as Marvin Gaye once sang, there "ain't nothing like the real thing." In response to the title question, which we were asked recently, we'd like to clarify how this plays out in the case of the OEC 9600 SRAM card.

Need an SRAM card? Click here to request one.

OEC 9600 SRAM Substitutes May Be Risky

We are not aware of any qualified SRAM substitutes for the 1mb SRAM that comes standard on the OEC 9600. In this case, "qualified" means both functional and subject to typical lifespan/battery drain conditions. SRAM cards that match the OEM standard are the only type that Block Imaging sells and stands behind.

It is possible that other options may get you past your error code and up and running again- SRAM cards are, after all, a common component of hundreds of types of computers- but non-standard cards also carry some ongoing risks that should be taken into account:

First, know that some field service engineers have policies about working on equipment with parts that don't match the OEM standard. If you find a substitute, the person you might normally hire to install it may decline your request. If someone on your team installs it, your service provider may see it and decline future service calls.

Second, while a 4mb SRAM may work, it's also likely to drain backup batteries much faster than the standard 1mb SRAM- increasing the risk of data corruption. The rate of drain will also vary among vendors, creating an additional degree of unpredictability.

Third, buying a blank SRAM card to program and install yourself is unlikely to prove successful. Because Windows has poor SRAM support, most of today's laptops cannot perform the programming procedure. We program these in-house with specialized equipment.

What about PCMCIA flash?

We'll be honest: we've never seen a PCMCIA flash memory card in this application before, therefore we can't say definitively that it wouldn't work. What we can say is that trying one would carry all the same risks and caveats as trying to substitute a non-standard SRAM card.

In the long run, when it comes to OEC 9600 SRAM cards, the standard, pre-programmed, 1mb card is the safest bet for getting exactly the part you need, with exactly the data you need. Other solutions may exist, but the risk, cost, and effort involved in finding them could leave you with significant downtime in the interim. 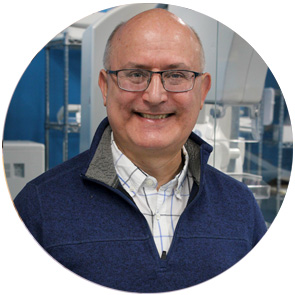 Tim Totten is a Component Repair Technician at Block Imaging. Tim is Block’s in-house electronic components expert, repairing imaging equipment parts at the deepest level. When he’s not repairing crucial system components, Tim enjoys cycling with his family and volunteering at his church.