While the OEC 8800 differs from the OEC 9900 more than any other full-size C-arm the company makes, the two systems still have an awful lot in common cosmetically and functionally. This fact raises some questions: What's the same? What's different? And what do those similarities and differences mean for buyers who might be in the market for a their next C-arm?

To answer those questions, we'll take a side-by-side look at how the OEC 9900 and 8800 are alike, how they’re different, and where we typically see them shine in the field:

The 8800 has a stationary anode tube while the 9900 has a rotating anode. The output of the rotating anode is significantly higher and allows for more penetrating power on larger patients and thicker anatomy, as well as the ability for longer and more consecutive scanning. 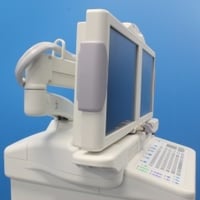 The 9900 comes standard with dual, flatscreen monitors, positionable on an articulating boom arm. The 8800 comes with fixed CRTs.

The 9900 is available in motor-driven varieties with table side controls for C-arm positioning.

The 8800 comes standard with 45 degrees of overscan flexibility in its orbital rotation. To see this feature in the 9900 series, you would need to purchase the 9900 Super C. Because of its overscan, the 8800 is capable of iso-centric scans. This reduces the need for repositioning patients and increases efficiency.

While the monitor carts of both models have the same footprint, the C-arm of the 8800 is significantly more compact. Maneuvering, storage, and use in tight spaces are easier with the 8800.

With a closer look it becomes clear that, in some scenarios, the OEC 8800 can be underwhelming while in others, the OEC 9900 might be "overkill" in both power and pricing. Depending on the type of work you plan to do most often at your site, either of these OEC C-arm models could be a good fit. If you're still unsure, we're ready to help you learn more. Contact us below to let us know what you're hoping to find.