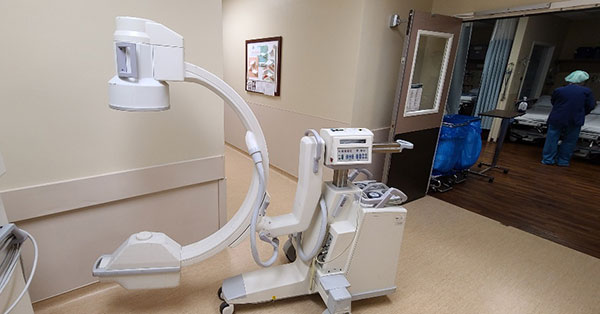 Anyone who has shopped for a C-arm can tell you: there are several tiers of C-arm prices and, even after you find the tier that fits your budget, there can still be a lot of options to compare to find the best functional fit for your needs.

That's why we've put together a side-by-side comparison of the OEC 8800 and the OEC 9600- two models that, while they occupy the same relative price bracket, have some significant differences in function and ownership experience that are worth mentioning.

The OEC 8800 is a newer model. This means the average 8800 you'll find on the secondary market has seen much less use than the average 9600. Of course, this doesn't mean that there are no 8800s that have seen hard use or no 9600s that have been very well cared for, but the date of manufacture is a useful indicator of how long a system has been in service.

The OEC 8800 has lots of parts crossover with the OEC 9800. With some notable exceptions, anyone needing replacement parts for an OEC 8800 will be able to benefit from the wide availability of parts for the OEC 9800. This is a maintenance advantage over the 9600, which has been declared end-of-life by OEC.

The OEC 8800 has touchscreen monitors. This is more of a convenience than a necessity, but most of the C-arm users we've worked with seem to prefer it.

Overscan is a standard feature of the OEC 8800.

The OEC 9600 has more power. Because the 9600 uses an X-ray tube with a rotating anode, it can scan longer and at higher techniques. This gives it a distinct advantage over the 8800 in heavier-duty applications.

If you're looking for a system to use during lighter-duty procedures (ex: needle placements/ hand and foot specialties) the power level of the OEC 8800 will be sufficient, its higher image resolution will be an advantage, and its parts crossover with the OEC 9800 will help keep replacements available for the foreseeable future.

On the other hand, if you need more power (ex. run-offs, cross laterals, larger patients,) the OEC 9600, with its rotating anode tube, will be a better pick. You'll also stand to save some capital cost on the purchase. Keep in mind, however, that you may not be able to hold onto it for as long as its end of life status with the manufacturer will see its parts availability begin to diminish over the next few years.

A technical comparison of capabilities and features of the OEC 9800 and OEC 8800 C-arm systems.