Is a Helium Shortage a Good Time to Upgrade Your MRI? 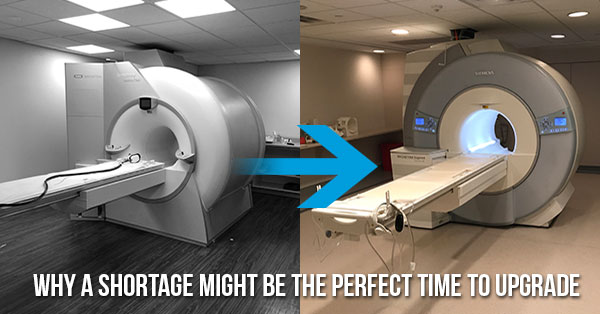 The current shortage of liquid helium and the high prices that come with it might make right now seem like a time for MRI users to lay low, hunker down, grit their teeth, and prepare for a long slog through a turbulent market. But, market turbulence or not, the opposite could be true- depending on what type of MRI you use. Below, we'll share with you why now might be a good time to make a bold capital equipment move: upgrading to a more efficient MRI system.

One of the nice things about MRI technology, and one that makes the secondary market such a viable one, is the fact that the core of the technology hasn’t changed significantly. Newer systems get you vastly improved image quality and scan speeds, but the concept of harnessing the field of a huge magnet to take pictures is essentially the same. This allows older systems to stay diagnostically viable for a much longer time than technologies that change at a faster pace. It's not all that unusual for our team to find magnets from as early as 1995 still serving in the field. And if they still take satisfactory images, why not? The system is paid off. Your techs are extremely comfortable with it... And the change-resistant rhetoric goes on.

The problem is that the efficiency of MRI cooling systems in the 90's and the early 2000's doesn't hold up as well as their diagnostic usefulness. Older systems can kill your bottom line in service and helium costs during helium price spikes like the one we're experiencing now.

About 2000 liters of liquid helium are encased in the cryostat at negative 450 degrees, and that helium wants more than anything to boil into gas and float away into the atmosphere. Older MRI’s like the Philips Intera, the Siemens Symphony, and the Toshiba Vantage and Titan didn't have the benefit of the high-efficiency technology that has come along since- and they can’t be field upgraded with it.

If you have any of the following systems, here are the rates at which your helium is literally disappearing:

And if you own an older, long-bore MRI (pre-2000 typically), suffice it to say that you will be topping off helium quarterly, as they boil much faster than even the systems on this short list.

One way you can mitigate the cost of helium is to upgrade to a "zero boil-off" magnet. This technology, increasingly common in models from the mid 2000's and beyond, uses a highly efficient coldhead that captures helium gas before it escapes and recondenses  it back into liquid. As long as the coldhead is operating within specifications, the helium will stay in the cooling system and continue to cool the magnet.

Zero boil-off systems aren't perfect. Sometimes there is helium loss during maintenance procedures, or if the coldhead is temporarily down, but the amount of helium lost in a year is a fraction of what many older systems lose as a matter of course. The annual savings can easily top $20,000 or even $30,000. Over the lifetime of your system, these savings add up to a major offset for the cost of upgrading- and you and your patients can enjoy the benefits of higher image quality, greater comfort, and reduced scan times that come with newer MRI equipment.

Here are some examples of MRI's that effectively replace low-efficiency magnets, but are available at secondary market prices:

Given the current shortage of helium and no indication of a price decline for the foreseeable future, now may be the time to consider upgrading to a more efficient magnet. Inefficient magnets have a helium appetite that needs to be satisfied regularly- and the bill has gone from McDonald's-level, to Ruth's Chris in just a few years.

Upgrading your system to a newer, more efficient model will involve a capital investment in the beginning, but the combination of lower service costs, lower helium costs, and better functionality can add up and make it worth your while sooner than you think.

If you have more questions about weathering the helium shortage or any of the MRI systems we discussed here, our team would love to help. Use the button below to tell us your needs.

When Should I Schedule a Helium Fill for My MRI Machine?

How low is too low when it comes to helium levels? Here are some OEM recommendations from common ...