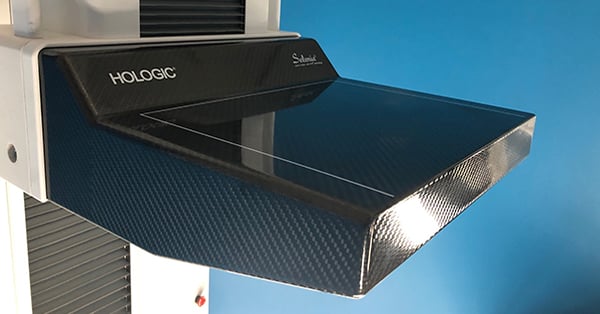 A dependable digital mammography unit is the cornerstone of any women's health department. Among the leaders in the digital mammo modality is the Hologic Selenia series.

While the Selenia's performance has earned it this place of favor, it's still subject to some of the same service and maintenance pratfalls of any digital X-ray equipment. One of the most serious among these is the eventuality of digital detector failure.

To help all you Selenia users out there prepare for this a little better, we've compiled information from the experiences of our parts and service teams and the facilities they serve to bring you typical cost, lifespan, and replacement information for your Hologic Selenia digital detector.

The Types of Selenia Detectors

Regardless of which of these part numbers is on the detector that's currently installed on your Selenia it's important to be aware of both of them for several reasons:

• Either of these detectors can be used on your Selenia.

• Availability of detectors can fluctuate. Having two part numbers to search under increases the likelihood that your replacement will be found quickly.

• On paper, the difference in cycle speed seems significant. In practice, it's highly unlikely that your techs will be able to reposition a patient for their next exposure in just 11 seconds anyway.

The Cost for Selenia Detectors

The average cost of a Selenia detector is between $25,000 and $65,000, depending on the age of the detector and which cycle speed it has.

While no two Selenia detectors are alike, there are some ballpark life expectancy numbers that have been observed by our engineers and those we partner with. There was also a change in design that led to a greater life expectancy part of the way through the production run. Selenia detectors made before August 2009 tend to last around three years in the field. Those made after that point tend to last five years.

There really aren't concrete signs that a Selenia detector is on the verge of failure. It generally just happens. One day, a system will work as well as it ever did, and the next day every image could have an artifact.

When it's your detector's time to go, there's really only one solution: get a replacement on the way ASAP. The best way to facilitate this is to preemptively begin a working relationship with a parts supplier. Get your facility in their system, let them know which equipment model you use and what your needs might be. The more you and your supplier are able to anticipate this eventuality, the quicker you'll be able to respond to detector failure and get your Selenia running again.

If you have a mammography parts need right now, you can contact our Parts Team at 877-621-2887 or use the button below to submit a parts request online.

How to Pack and Ship a Digital Detector

What's the best way to ship something as sensitive and costly as a digital detector? Follow these ...