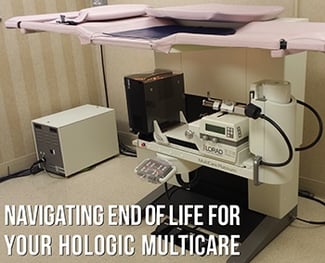 If your facility has been performing breast biopsies with a Hologic Multicare stereotactic table, you know by now that Hologic has declared the Multicare to be "end of life" (EOL). We want to reassure you that this isn't as scary as the phrase itself sounds. It does mean that some things need to change at your facility, but it doesn't mean that you need to change now, or that your only option is to turn to the OEM

Using the recently EOL-ed Hologic Multicare stereotactic biopsy table as an example, we're going to share with you why OEMs use EOL designations, why EOL doesn't require an urgent response, and how EOL can actually benefit your operating budget.

Why is my system declared EOL?

Most EOL designations are rolled out ten years or so after a model's final year in production. EOL means a manufacturer is putting a firm end date on their obligation to provide replacement parts and service support for that equipment. It also means they won't need to take potentially costly measures to make older equipment compliant as government standards change.

The primary reason OEMs issue EOL designations though, is to direct customers onto the upgrade track for their newer models. The upgrade track isn't necessarily a bad road to travel. Newer systems can offer technology that improves image quality, tech/doctor workflow, and the comfort of patients. But, of course, newer systems come with bigger prices; prices that many smaller facilities aren't ready to handle on short notice.

There are two main reasons why an EOL designation doesn't typically require an urgent response:

1. If you are currently covered by an OEM service contract, they are still obligated to support you for the duration of the contract. This duration might be longer for some than others, but you won't be denied support immediately.

2. When an OEM tapers off their support for a model, parts and service don't disappear from the market altogether. For many models,  third-party parts and service providers have the resources that can keep them scanning for several more years.

How You Can Save with EOL

There are situations in which an EOL designation comes as a financial advantage. Consider these scenarios:

1. With the OEM no longer a contender for service coverage, and your plans to upgrade still a year or two in the future, you begin considering independent service options and learn that your Multicare can continue to receive parts and service for 30% - 40% less than you were previously spending.

2. With your Multicare in its EOL phase, and some wiggle room in your budget, you decide that now is the time to upgrade the biopsy equipment at your primary facility. Meanwhile, you enlist the capabilities of independent parts and service providers to relocate your Multicare to a secondary outpatient facility, upgrading from even older equipment in use there, and saving the 30-40% in service coverage costs we mentioned in scenario 1.

While being subject to an EOL notice does mean that something has to change at your facility, it doesn't mean the change needs to be expensive or happen right away. By leveraging the availability of third-party parts and service providers, the change could be years from now and actually save you significant cost.

Chin up, Multicare users! If your stereotactic table's EOL designation has left you wondering about your next steps, just keep in mind that you probably have more time than you think, and that parts and service providers like Block Imaging have everything they need to keep your Multicare going for several more years.