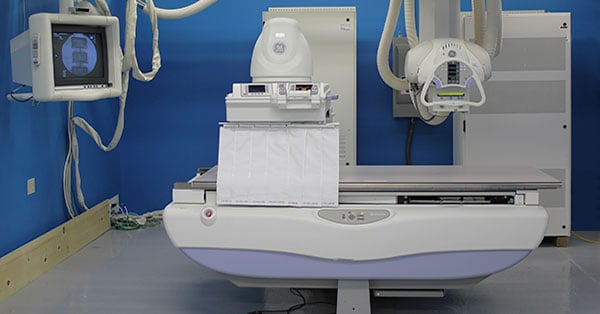 If you're considering a GE Precision 500D R/F room, you're looking at one of the most reliable workhorse systems in the entire imaging field. It's worth noting, however, that not all Precision 500D units are the same. In 2006, several years into the P500D production run, GE updated the system and their value increased significantly.

The early Odetta model of the P500D had multiple computers (the MARS and Saturn) and a console (the Venus) that had to work together simultaneously. This resulted in more frequent communication errors and reboots.

GE developed the Aurora system by combining the Venus console and MARS computer into the Magic PC. This streamlined communication internally and reduced reboots, downtime, and service call needs. As an added bonus, the upgrade refreshed the look of the P500D by reducing the bulky footprint of the older console to a standard desktop PC setup.

While the Aurora upgrade combined the Venus and the MARS, it also updated the Saturn PC to the V1-V4 models. This update resulted in fewer parts, easier servicing, and more reliable performance.

At this point, it may sound like we're speaking poorly of the Odetta P500D. We can assure you this is not the case. If any model in the R/F space can be considered the "standard" it's the Precision 500D. And while the Aurora 500D made improvements, the reputation of the model line was built on the back of the original release, the Odetta.

The Odetta system wins in the area of price, with costs averaging 20%-30% less than Aurora systems. The trade-off is, of course, the increased likelihood of communications errors, but the Odetta still serves many facilities well.

In the end, the biggest deciding factor in which version of the Precision 500D to pursue is patient volume level. If your facility sends a moderate to high volume of patient cases through its R/F room, the Aurora Precision 500D is a better pick for you. If your R/F caseload is low to moderate, the occasional comms error probably won't derail your entire schedule, and you'll enjoy the cost savings to invest elsewhere in your building.

In either case, the Block Imaging team is ready to assist in your next R/F project, from start to finish. Use the button below to tell us what you're looking for and how we can help you.

What Happens During an R/F Room Refurbishment?

How Much Does R/F Room Service Cost

Devinn LoVette is an Account Executive at Block Imaging. In his role, Devinn finds and creates opportunities for Block Imaging and our partners to give a second life to medical imaging equipment. Outside the office, he is a youth pastor at City Life Church, an avid athlete, and a high school basketball coach.