People looking for their next cath lab often ask us, "What is the difference between the Innova 3100 IQ and the 3131 IQ?" Well, to give you the short version of that answer: the 3100 IQ is the single-plane system, while the 3131 is the bi-plane version.

There are, however, a few other, technical nuances and quite a bit of equipment that set these two systems apart from one another. We'll take a look at that in the next few sections so you can better know if either of these systems might be a good fit for your facility.

As you might suspect, within every 3131 IQ bi-plane is a 3100 IQ single-plane. Both of these systems feature a floor-mounted gantry with the same X-ray tube and 31 cm digital detector on it. The tubes are cooled by the same chillers and the detectors use the same conditioner. Aside from these virtually identical gantries, both models also use the same Omega V long table.

Discussing the differences between these two labs is really a matter of enumerating the additional components that the 3131 has beyond the equipment associated with a 3100. 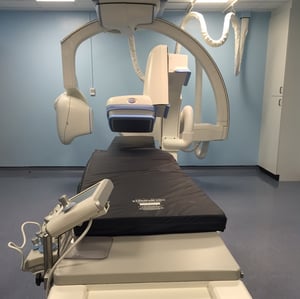 The most obvious piece is the second, ceiling-mounted gantry. This is known as the lateral gantry or, colloquially, the "lat". The lat holds another tube and detector, both identical to those in the floor-mounted gantry. Another chiller and detector conditioner are also needed.

The 3131 also has another cabinet. This cabinet houses additional computing and a second generator.

The monitor boom on the 3131 holds up to eight monitors while four to six monitors is typical on the 3100. The additional monitors on the 3131 boom are used to view the images being captured by the lat.

Two additional monitors are installed in the control area. These are for AP and lat live and reference images.

While the software interface is basically the same between the 3100 and the 3131, there are more options and capabilities to integrate the second gantry.

If you intend to do general diagnostic and interventional work, the Innova 3100 IQ is the front runner in this comparison. This is due primarily to cost savings. Because the 3100 is sufficient for general cath/angio work, the purchase of a 3131 would mean paying a sizable chunk of money for extra components you wouldn't use.

View our average price list to see how much refurbished cath/angio labs cost.

On top of that, because there are two detectors, two X-ray tubes, and a lot more moving parts to cover, service and maintenance costs are significantly higher on bi-plane systems.

See our cath lab service price list to learn what service coverage for your system might cost.

There are also advantages in site planning and space requirements. Bi-plane labs require the installation of a ceiling support system as well as a larger overall room to maneuver both gantries relative to one another,

In most fields, the more specialized you become, the more you can expect to spend to acquire the right tools for the job. Interventional radiology is no exception. If the bulk of your cath work won't focus on the brain or more involved cardiac procedures, the Innova 3100 IQ will be a solid choice. However, if specialized procedures are work your facility will see often, a bi-plane system like the Innova 3131 IQ will be a sound investment.

GE Innova IQ and IQ Plus cath labs are built around the same Innova core, so what sets them apart? ...