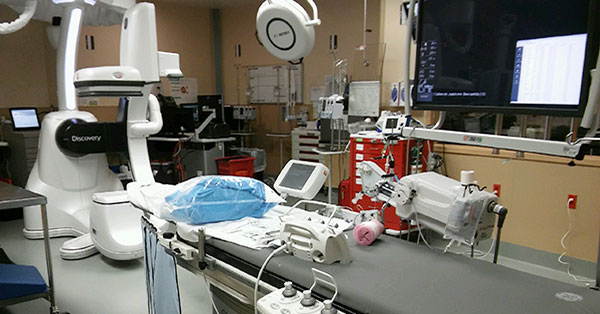 While the IGS 5 and IGS 7 series have a lot in common when it comes to tubes, detectors, chillers, and computers, there are a couple of major differences that set the two apart from one another. Today, we're going to break those differences down.

The AGV positioner brings IGS 730 and 740 labs the functional familiarity of GE's floor-mounted gantries but adds the ability to wheel the gantry out of the way for full, unencumbered access to the patient table. The system uses a laser guidance system and mirrors mounted around the room to track its position at all times.

The AGV swivels around the table when in position for imaging, and can have 10+ preset locations to move the system, including parked positions, for when imaging is not needed. Table-side controls let the user back the gantry away from the table and into a parked position with the touch of a single button.

The other big difference between the IGS 5 and IGS 7 series systems is their table options. The IGS 5 series has several table options available, depending on your needs. These include the Omega IV, Omega V, Innova IQ V3, or Innova IQ V4.

Meanwhile, the IGS 7 series offers just two table options: the Innova IQ V3 or the OR variant, which features the Maquet Magnus table. The high articulation of the Magnus table, along with its assortment of interchangeable tabletops, makes it an extremely flexible option for all types of procedures, from cardiology, to vascular, to neurosurgery, and more.

Presently, neither the IGS 5 series nor the IGS 7 series are common on the secondary market. Only the first few are beginning to creep into availability. That said, as they continue to emerge, expect higher prices on IGS 7 labs than IGS 5.

Because the imaging chain and software features are the same, users can expect the same level of image performance across both series. Facilities with more "bread and butter" caseloads and moderate volume can be served well by the IGS 520, 530, or 540 and save significant dollars. Facilities that have more mixed use across specialties and/or high volume will benefit greatly from the workflow and efficiency advantages of the IGS 730 or 740, but will need greater latitude in their capital equipment budgets to do so.

Similarities and differences between the GE Innova and GE IGS 5 cath lab product lines and what ...

Planning your next GE cath lab project? Check out minimum room dimensions for the GE Innova and IGS ...