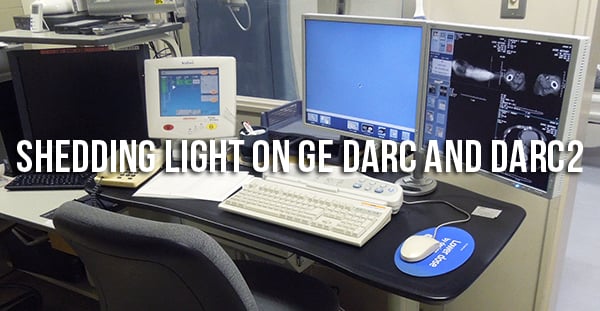 Your GE CT's data and reconstruction computer (DARC) is a crucial component of its reconstruction chain. The DARC gathers the high speed data stream from the detector's data acquisition system (DAS) cards through a DAS interface processor (DIP) and stores and transfers it for reconstruction in the image generator (IG) computers that reconstruct images from the data. Your DARC also handles the voice/audio controls to the gantry via an external box on the left side of console, and the scan control interface module (SCIM) – the control pad the operator uses to initiate scanning. Long story short: no DARC = no pictures.

Below, we'll share with you the vital statistics of owning a DARC so that you can know what to expect from this component and be better prepared to minimize downtime in the event of a DARC failure.

Need a DARC or other GE CT part now? Click here to request and see pricing.

The first version of DARC had a 3.5 disk drive and a scan control intercom module (SCIM) for the operator. It also had a scan data disk array (SDDA) that stored raw images, audio. DARC is found on GOC 3 consoles.

DARC 2 was the first revision of DARC. It did away with the disk drive and moved the audio amp to an external module (ICOM). The scan data disk array was made internal and the chipset was updated. There are two chipsets for DARC 2- Jarrell and Westville. Jarrell is the newer of the two and is commonly installed as a replacement for the Westville. DARC 2 is found on GOC 4 and LCGOC consoles, as well as upgraded GOC3 consoles..

It is important to note that DARC and DARC2 are not interchangeable.

The part number of your  DARC or DARC2 is the place to find all the details you need about compatibility between computers and DIP cards. The revision (denoted by a dash followed by a digit) in a DARC2 part number is specific to the revision of the DIP card within it. Because of this a DARC2 with no dash in the part number, both Jerrell and Westville, is not compatible with a -2, or -3.

There is compatibility between Jerrell and Westville DARC2 computers but they must have a matching DIP card. For example, a -2 Westville DARC2 is compatible with a -2 Jerrell because they are both used on 4 and 8 slice MDAS systems.

Below is a chart showing the slice count and DAS version for each revision of DARC. If the root part number of a DARC or DARC2 is followed by a dash and any additional numbers, remember that this indicates which DIP card is needed.

Whether your scanner has a DARC or a DARC 2, you can expect the same lifespan due to the high similarity in their internal components. In the experience of our engineers and the parts buyers we've worked with, the average is between one and two years.

The most common sign of DARC failure is that it won't power on or cycles power. This indicates that the power supply is disconnected or bad outright. You can open your DARC and check to see if it has come unplugged, in which case it can simply be reconnected.

Another common problem is image storage failure. If images are not being stored, it's likely that the DIP card has gone bad.

There is also a possibility that your DARC was jarred during shipping- either with the system initially or the last time a replacement was shipped to your site. DARC units can be very touchy. If they get bounced around, the memory modules can shift and cause a DARC failure. You can troubleshoot this problem by checking that the connections are firm on your memory modules.

Given GE's large market share in the world of CT scanners, DARC and DARC 2 units are relatively easy to find on the secondary market so that you can take advantage of that moderate pricing we discussed earlier. Whether your DARC needs to be replaced, or could benefit from some more troubleshooting, our parts team and our service team are ready to help you get your CT scanner back in action.

Learn the four crucial steps to prepare your site for an incoming MRI scanner.

A product review of the Siemens Biograph Duo PET/CT.