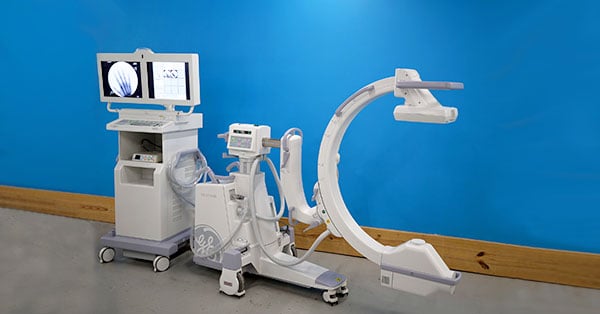 Over the last few years, more and more C-arm technology has begun embracing the same trends the industry has seen in interventional labs, namely, a move from traditional image intensifiers to digital flat-panel detectors (FD). As FD options become more available, anyone considering the purchase of a C-arm is increasingly likely to be confronted with the big decision: Analog, or digital?

Below are some aspects of C-arm hardware that buyers should bear in mind when choosing between a system with an image intensifier and a system with a flat-panel detector:

While FD systems have more of a foothold in the market than ever, (especially in the mini C-arm market where they are quickly becoming the norm) the II is still the current standard for full-size C-arms and is found on the majority of systems in use today. Image intensifiers are capable of providing high-quality images for a number of years but, eventually, they all lose image gain and the image quality decreases gradually. They can be a pricey component to replace but, fortunately, used and refurbished IIs are easy to find on the secondary market.

In place of an II, an FD C-arm has a flat detector like those you might see on GE's Innova series cath labs or Hologic's Selenia mammos. These exhibit very limited image degradation and over a much longer period of use than an II.

A fact of using an II is the need to collimate down for higher magnification. More detail becomes visible, but the field of vision is reduced with each step up in magnification. On the other hand, magnification on an FD system doesn't reduce scale at all.

FD C-arms have the potential for higher image resolution than their II predecessors. Resolution varies from model to model, but overall, flat detectors have the ability to produce a more consistent, high-quality digital image.

Keep in mind that, apart from acquisition, proper technique, quality of monitors, and post-processing have a significant effect on image quality. If these aspects are not properly accounted for and maintained, it is also possible that an II can outperform an FD.

In the first few years of FD C-arm production, manufacturers were pairing the hardware with advanced packages like cardiac and vascular. Now, however, FD models from prominent manufacturers, like the Siemens Cios Fusion or the OEC Elite are available with basic surgical software packs too. As full-size FD systems trickle onto the market, there will eventually be a place for them with practitioners in all specialties.

Why an II System Might Be a Better Fit

So far, everything you've read points to FD systems as superior. If the only factor you're considering is image quality, it's true- FD systems have the capacity to produce clearer, sharper images than your average II system, with dramatically lower image degradation over time. For many facilities, however, there are more variables that come into play. Below you’ll find a few areas where an II-equipped C-arm might make more sense.

New FD units costs around two to three times more than their II counterparts. Also, because FD technology is relatively new for C-arms, it's somewhat difficult to find a used or refurbished system, leaving new as the most likely recourse for the facility that "must have" the latest. Still, pricing for FD C-arms is on its way down. This is due, in part, to the increasing number of manufacturers offering them. Not too long ago, only major OEMs like GE, Siemens, and Ziehm were producing FD C-arms. Now, smaller companies like Korea's Ecotron or GEMSS (formerly Comed) have brought models to market.

Refurbished II C-arms are common and encompass a far wider range of price points. If your patient volume is low to moderate, or if your work will require only general surgery applications, an II-based C-arm will be both sufficient and far more affordable.

When you place your FD C-arm under service coverage, your agreement will likely cost 50-60% more. You are also more often at the mercy of the OEM for spare parts. There are very few used detectors on the market for any of the OEMs that are currently making FD C-arms. While it's no fun to pay $8,000 - $15,000 for a used II, they are readily available and far less expensive than a brand-new digital detector.

The Long and the Short

There are countless want vs. need. vs. budget scenarios out there, but, in spite of all these variables, we can offer this relative to choosing between an FD C-arm and an II C-arm:

On the high end of C-arm systems, an FD C-arm will give you optimum image quality, without degradation, over a significantly longer period of time. Keep in mind, though, that a good portion of your budget should be reserved to handle the larger parts and service costs.

For facilities with a smaller budget, we suggest a late-model, used II system. While the image quality capabilities won't be as high as those of a digital system, II technology has been used for years and is still reliable for use in your general case load.

The long and the short of it is this: FD C-arms have some powerful hardware advantages. If you can afford one, you won’t be disappointed. If an FD is outside your limits, an II C-arm can still serve you and your patients well until pricing on FD units becomes manageable for more facilities.

OEC C-Arms: Not all Refurbished C-Arms Are Created Equal

While OEC C-arms are the best, make sure you get the best Refurbished C-arm from a trusted company ...

The steps Block Imaging use to restore used C-arms into refurbished C-arms.