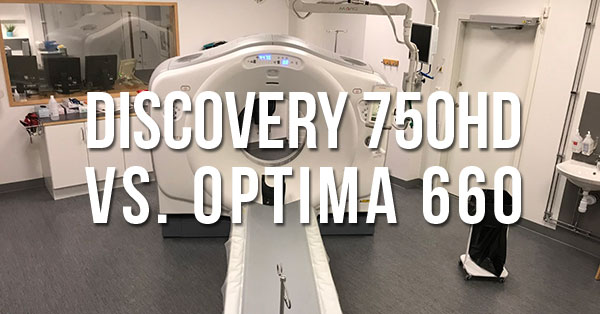 The GE LightSpeed VCT 64 has been the most popular 64-slice CT in the world since it rolled off the line in Milwaukee in 2005. Since then, as GE seeks to maintain their market share, they've rolled out two successors to the VCT: The Discovery 750 HD and Optima 660. In designing these systems, they’ve kept some of the features that made the VCT popular- smaller footprint, similar operating systems, air cooling- but also made significant changes that improve performance and offer more options. Below are some of the biggest changes that distinguish the Optima 660 from the Discovery 750 HD, and distinguish both models from the VCT.

The Optima 660 can come  32, 64, or 128-channel detector configurations. It uses a 6.3 MHU tube that, while not interchangeable with the MX 240 used on the VCT, still costs less to replace than the Perseus tube used on the 750 HD because of third-party options.

Although ASIR isn't listed among the 660's “standard” features, nearly every unit has it. When enabled with Overlapped Recon-Axial Option, the 660 can reconstruct 128 Images/rotation. The later version of the Optima 660 (2015 and newer) can also have Smart MAR (metal artifact reduction), though very few in the market currently have it. If you must have one, you can expect a scanner with MAR to cost significantly more, and will need to plan for plenty of time to search one out.

Don't let the numbers fool you: the 750 HD was actually introduced before for Optima 660. The 750 HD, however, boasts high resolution and Gemstone Spectral Imaging (GSI), focal spot switching, and kV switching. The 750 HD only comes with a 64-channel detector, but it can also support Smart MAR (with certain consoles) and is generally “fully loaded” with cardiac, Overlapped Recon-Axial, and ASIR when purchased second-hand.

We see few drawbacks to choosing a system like the 750 HD other than the lack of a third-party replacement for its tube. When the dreaded eventuality of tube failure comes, we recommend considering a used replacement for the sake of your bottom line.

Ultimately, both of these scanners are excellent options if you’ve enjoyed the VCT 64 but are looking for newer technology. The 750 HD has an edge when it comes to image quality, but the Optima 660, because of its tube options, is far less expensive to maintain across its life.

If you have any questions about either of these scanners, or other models, give us a call or use the button below to tell us how we can help.

Looking for an affordable successor to your current CT? The GE VCT 32 or VCT 64 might be right for ...

GE VCT 64 and Siemens Sensation 64 CT scanners: two big names, but which is better for you? ...

If you're looking for 64-slice CT scanners, this side-by-side comparison of the Toshiba Aquilion 64 ...