Michigan is the latest (21st) state to require breast density reporting for all mammography patients. The legislation varies in wording from state to state, but the same central idea is at the heart of each individual law: Every woman who has a mammogram needs to be aware of the density level of her breast tissue, and it is the responsibility of the facility that provides the screening to make that information available to her.

Simply put: cancer is harder to find in dense breast tissue. According to breast density reporting advocacy group, Are You Dense Inc, connective breast tissue appears white on a mammogram, as do cancerous masses. In denser breasts, cancer can often hide behind connective tissue.

Breast density is reported in four categories- A,B,C, and D. Women whose density falls in the C and D categories are at a greater risk of having cancers missed by standard mammograms. It is recommended that they pursue further screening via ultrasound or breast MRI.

Breast density reporting laws help ensure that women are made aware of the density of their breast tissue and the risk it might pose relative to the discovery of breast cancer. This information is essential to making an informed decision about whether or not to pursue additional screening.

Much of the groundwork for calling attention to this issue has been done by Are You Dense Inc. and their affiliate, Are You Dense Advocacy, through widespread awareness campaigns. Density reporting requirements have been signed into law on a state-by-state basis since 2009, beginning with Connecticut.

In February of 2015, the 114th Congress reintroduced a bill that would set minimum federal standards for breast density reporting. This legislation is pending.

One of the resources you'll find at areyoudenseadvocacy.org is a map, like the one below that tracks the spread of breast density reporting legislation in the US. 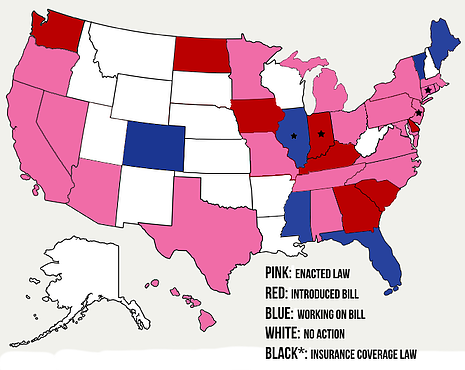 As the map shows in pink and red, over half of the states have enacted a law or have a bill introduced to enact a law. If you live or work in a state shown in blue or white, there's a good chance measures like these will be on the docket for your state legislature in the near future.

If you'll be undergoing a mammogram this year in a "pink state", you can count on being more informed about your personal care and more empowered to pursue it. If your state has no requirements enacted, you can still ask your doctor about your breast density rating and what it might mean for future screening and detection.

A side-by-side comparison of OEC C-arms, highlighting major components and differences between OEC ...

A brief overview of the OEC 9600 features and capabilities, as well as its continuing viability as ...