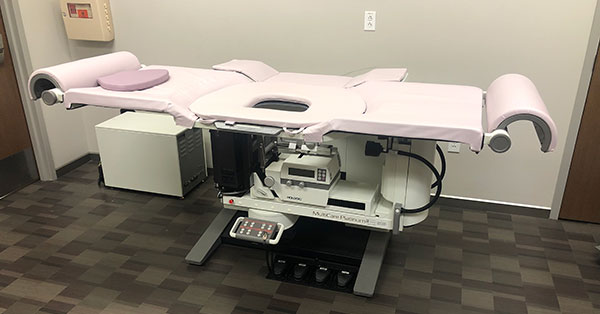 Looking for a prone stereotactic table? Or perhaps you're seeking parts or engineering coverage for your existing system. How fortuitous! We're going to tell you about 3 stereotactic tables you're likely to come across as you search for your next prone biopsy equipment purchase, service agreement, or spare parts solution. We'll also fill you in on where these tables stand with OEM support coverage.

MultiCare stereotactic tables are considered older technology but are still seen for sale on the secondary market. With proper calibration, consistent care, and an experienced tech these systems can still be accurate and reliable. One limitation is that they have DOS operating systems instead of Windows, which makes them incompatible with PACS systems.

Due to their age, MultiCares also have limited to no parts availability. In terms of OEM service, it's all but dried up. Now, a manufacturer is more likely to steer customers toward the newer installments in the MultiCare line or a standup mammography unit with a biopsy attachment.

Some MultiCare tables in the field received "Platinum" upgrades from 2005 to 2007.

Limitations include: The table base remains original on upgrades. The systems lack some of the user-friendly button features located on the stage (and found on the “born” Platinums) that allow for easier rotation of the X-ray arm and camera. Essentially, upgraded Platinums require the user to use two hands to reposition the X-ray arm and camera instead of just one. Cosmetically, it’s possible that when the table received a field upgrade, it may or may not have had the older decals removed or received the newest "MultiCare Platinum" logo decals that accompany some upgraded systems. Despite not having these labels, it’s very possible the table could/would be still considered a “Platinum” with the associated features mentioned above.

Since so many of these tables are positioned against walls or in corners, a quick tell-tale sign as to whether or not the upgrade has been done is a grey/brown AEC cable coming out of the back of the camera. Another sign will be the addition of a newer MultiCare Platinum serial tag from the year of the upgrade.

Upgraded MultiCares have parts availability limited to current stock. No special parts orders will be accepted and it's unlikely that Hologic will open new contracts on this equipment.

Factory-born Multicare Platinums come with the same improvements as the upgraded systems above. Additionally, the stage includes a number of user-friendly buttons that allow the operator to rotate the X-ray tube and camera with one hand instead of two. Late 2012 and newer Platinums feature a “comfort package” consisting of a more ergonomic table top and pad for patient comfort. Windows 7 is a standard platform on these newer units.

In terms of service and parts, “factory-born” Platinums are fully supported by OEM service.

In spite of Lorad's waning coverage for these systems, parts and engineering service for all levels of MultiCare are still available from third-party organizations and at much lower prices. As OEM service contracts continue to expire, it is also likely that the availability of third-party parts will remain stable for the foreseeable future.

If you have more questions about women's health equipment options, availability and/or pricing, please don't hesitate to contact us. We'd love the opportunity to help you out.

A comparison of the 2 leading stereotactic breast biopsy tables: Hologic Multicare Platinum vs ...

Sample diagrams you can use to help plan the room layout for your MultiCare or MammoTest ...