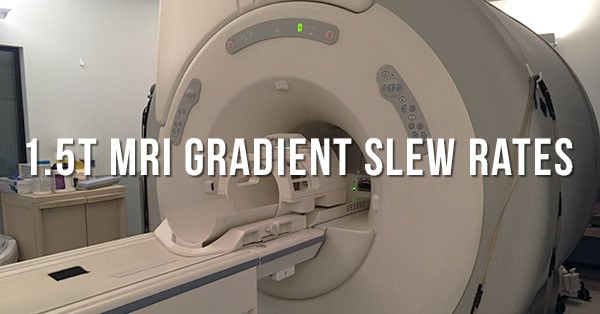 Thumping along at peak levels of 113 dB (just a couple ticks below a rock concert), MRI gradients are often unnerving and sometimes frightening. If you've ever wondered what it is inside an MRI scanner that makes the loud noise they are known for- gradients are the culprit.

Gradients are actually smaller magnets inside the main MRI magnet. Their job is to modify the magnetic field in the area being scanned so the system can “listen” for the resonance and create an image. It's difficult work to modify a magnetic field strong enough to lift a car (really), so the coils in these smaller magnets move and stress, literally vibrating. These vibrations are the source of the sound.

In spite of being noisy, they drive MRI value on the secondary market and they come in many varieties. That being said, let's dig a bit deeper so you can:

Already have an MRI model in mind? Click here to get a system quote!

The slew rate (AKA "rise time") is the speed at which the gradient reaches its maximum amplitude. Slew rate is measured in millitesla per meter per microsecond (mT/m/ms). The higher the slew rate, the thinner the anatomical slice, which means higher clarity in the image produced.

Each manufacturer has three or four different gradients and they all have interesting names (see the table below). Because of this, the easiest way to keep your gradient packages straight is by comparing the slew rate.

Many first-time buyers are under the impression that they should get the system with the highest slew rate possible. To them we say: It's a nice thing to have, but you have to be willing to pay more for it. A higher slew ratecertainly enhances the marketability of your MRI on the secondary market, but the initial cost of the machine will be significantly higher. Ultimately, the slew rate that is absolutely necessary for you to have will depend on the types of studies you intend to do on a routine basis.

If you'd like more information or a consult on which MRI scanner slew rate might be the best for the work you plan to do, our team is ready to help. Give us a call, or check out our free MRI Buyer's Guide to learn more.

Is a Helium Shortage a Good Time to Upgrade Your MRI?

The helium shortage has prices per liter higher than ever. Find out why that could be the best ...

How to Find Late-Model or Rare MRI Scanners

Tips to help your site get the rare MRI scanner that your doctors and technicians are clamoring ...