Who Makes the Best 3D C-Arm? 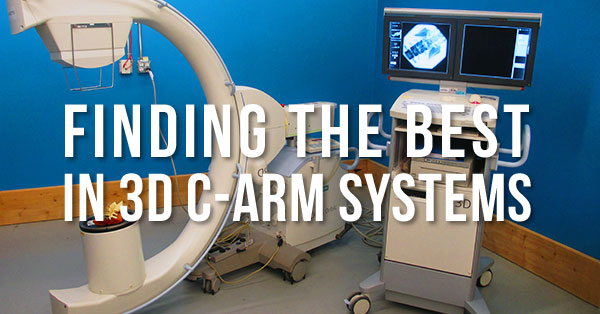 There are a lot of factors to consider when looking for the best C-arm for you. Software platforms, tube power, footprint, service availability, and cost all come into play. But when it comes to finding the very best 3D C-arm, one factor trumps them all: How well does the C-arm capture and render 3D anatomical images?

We dug into what kind of design allows for capturing the most accurate 3D images with the least amount of patient repositioning and the lowest dose. Read on to see the results and learn who makes the best 3D C-arm.

Finding the Best in 3D C-Arms

The field of options for 3D C-arms isn't a wide one at this point, but the options that are out there give physicians advantages in detail, guidance, and visibility that traditional 2D imaging can't.

What is isocentricity? Simply put, isocentric C-arms move in a perfect circle around the subject while other models rotate in an egg shape.

For a C-arm to be considered “isocentric”, the central x-ray beam must remain in the isocenter of the subject regardless of the position of the C-arm. The distance of the X-ray tube and the image intensifier from the subject does not change, allowing consistent image size throughout a scan.

An orbital rotation far beyond that of a standard C-arm is required to maintain isocentricity and perform 3D imaging with orbital movement. This eliminates patient repositioning during procedures which, in turn, reduces radiation dose and saves time.

Among current 3D C-arm manufacturers, Siemens is the only one producing C-arms with truly isocentric arcs. The 190° orbital rotation of the Cios Spin and its predecessor, the Orbic 3D (pictured below) is the highest among C-arms. The Philips Pulsera 3D and Ziehm Vario 3D have lower degrees of rotation and compensate for it with software applications. Their 3D modeling is based on formulas as opposed to actual anatomical images. The Ziehm Vision RFD achieves 180° of rotation through automation that repositions the arc during the scan to maintain an isocenter. 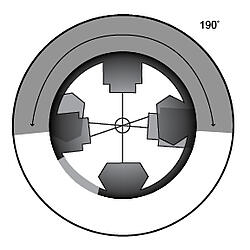 The Best in Tech

The latest generation of Siemens 3D technology, the Cios Spin, was FDA-approved in late 2018 and has just hit the market. It is the cutting edge in 3D C-arm tech. The Spin takes Siemens' existing isocentric design and combines it with the high power, 25kW generator found on their Cios Alpha. It also replaces the image intensifier of previous C-arms with a flat detector. In terms of surgical efficiency, the Spin has carry-over from the Orbic 3D in compatibility with navigation systems like Brainlab, Stryker, and Medtronic.

Technically speaking, the Spin is the most advanced, fully-featured 3D C-arm on the market. It's also one of the most expensive, with pricing rumored in the ballpark of $400,000.

The Best in Value

While the Siemens Cios Spin offers the most advanced technology for 3D C-arm systems, it's also very new, which means it won't be available on the secondary market for several more years, and it will cost significantly more than any other 3D C-arm model. Because of this, many buyers will find the Siemens Arcadis Orbic 3D to be a better overall value. The Orbic offers the same isocentric design and many of the same features as the Cios Spin but, being a generation older and foregoing some "bells and whistles", it will be in a much more affordable price range. The Orbic also has more availability than any of the other models we discussed here.

Siemens released their first 3D C-arms to the marketplace in the early 2000s. Philips and Ziehm followed suit more recently, but neither has had as much development time in this arena as Siemens, and neither is now two generations deep in their offerings. This edge has allowed Siemens to develop precise image fusion and real-time data as well as advantages in working with image guidance systems.

Congratulations to the Siemens for winning the Best 3D C-Arm Manufacturer award based on the true isocentricity, increased real-time accuracy, decreased patient repositioning, and decreased dose of their systems.

If you see patients for bariatric or vascular work, a Siemens Arcadis is worth considering. See ...

Pros and cons comparison of the Medtronic O-arm and the Siemens Orbic 3D C-arm for surgical ...

First impressions of the new Cios C-arms from Siemens. Predictions for how they will affect the ...