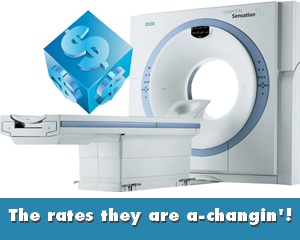 For imaging centers, both hospital and independently-owned, Medicare’s recent CR 7502 brings unique challenges and opportunities. As with any change in the federal reimbursement structure for diagnostic imaging, this legislation is a reaction to market conditions within the industry. The following is a brief history of conditions that helped bring on CR 7502 and a prediction of what implications it might hold for the future of outpatient imaging centers.

In the beginning, Medicare reimbursements for diagnostic imaging scans were the same, whether a patient was scanned by a hospital-owned entity, or at an independently-owned center. Hospitals were scanning on their own grounds as much as possible and referring their overflow to independents.

Later, one of CR 7502 legislative predecessors changed the reimbursement structure and cut payments to independents almost in half. When weighed against operating costs, these cuts forced independent doctors to question the financial viability of their centers. To maintain their income, many doctors opted to sell their imaging centers to hospitals and contract with them to stay on and read the scans now performed on the hospital’s newly-purchased equipment. Doctors who sold off breathed a sigh of relief as their colleagues who chose to remain independent took cuts and struggled with them.

At the same time, because hospitals were not subject to the same reimbursement cuts as independents, the purchase of an imaging center was a great chance for them to up their imaging capacity and thereby their opportunities to collect full-rate reimbursements. Moreover, by diverting scans off site, hospitals were able to enjoy a reduction in the operating cost per scan.

This new market condition was a loophole that law makers had not foreseen. By cutting payments to independents and not hospitals the Medicare program was paying more for the same services with each imaging center sale. This was a factor leading to the creation of CR 7502 and its 3-day payment window.

Under CR 7502 reimbursements to independently-owned centers remain static at the rate established by the previous round of cuts. However, imaging centers owned by hospitals are now subject to that same rate of reimbursement for scans performed on patients that are then admitted to the hospital within three days of the scan. Scans performed on patients that are not then admitted are still eligible for the full hospital-rate reimbursement.

Now that hospitals are subject to the same cuts that made imaging centers less viable before, they are asking the same questions that led independent doctors to sell in the first place: Does half our original reimbursement revenue, minus our operating costs, still yield a worthwhile profit (if any)?

Based on our reading of CR 7502, we’ve made two predictions:

For imaging centers that remain under independent ownership this will be a time of increased referrals. As hospitals see lower revenues coming in from their own outpatient facilities they will want to use them less, as a control measure against those losses.

For hospitals, this could be the perfect time to lower operating costs at their outpatient facilities by purchasing used or refurbished imaging equipment. The lower pricing available on the secondary market can go a long way toward off-setting the losses encountered through reimbursement cuts.

This legislation certainly holds many more implications than those we’ve discussed, and only time will tell which of them will come to bear. One thing is certain, however: it will behoove the entire industry to understand CR 7502 as clearly as possible and consider it carefully. As the Medicare reimbursement structure continues to change, hospitals and imaging centers will need to continue adapting at the speed of legislation.

The Affordable Care Act and the Medical Imaging Equipment Market

How The Affordable Care Act (or 'Obamacare') will effect the sale of both new and used medical ...

Find out why you should take advantage of Section 179 tax deductions on qualified medical imaging ...

Find out about valuable tax incentives for purchasers of qualifying imaging equipment.