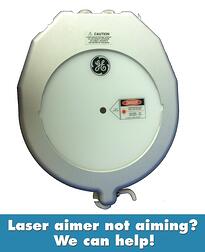 Is your OEC laser aimer broken? Fear not, we've seen it before! What I wouldn’t give for the glory days of the late 20th century; when the word “laser” conjured images of Han Solo battling storm troopers on distant planets or Superman foiling Lex Luthor's latest scheme. Alas: we live in the 21st century and, like all the other equipment we use every day, our lasers break down from time to time.

Fortunately, our resident imaging component repair specialist has spent enough time with these light-emitting bad boys that he has identified their most common failures. More importantly, the foremost of these failures has a quick user fix while the others are relatively inexpensive to correct. Read on to learn your best bet for seeing red again!

We’ve mentioned this in a previous article, "Your OEC C-Arm Laser Aimer Probably Isn't Broken" but the most common problem our tech still sees is dead batteries! When your laser aimer stops working, the first thing you should check is the AA batteries inside it. A laser aimer does not draw any power from the C-arm itself. Watch this 2 minute video below for more details on how you can do this quick fix this yourself

Inside your OEC laser aimer is a small mirror mounted on a piece of Styrofoam. Adjusted properly with the user knobs, this mirror reflects the beam exactly 90 degrees out of the aimer unit and onto the opposite tip of the C. If this mirror breaks off its mount, you may see a beam that won’t center or maybe even no beam at all.

Our repair tech has seen attempts to re-glue the mirror to the 45-degree Styrofoam mount, only to have the mirror sink into it, the beam then hopelessly off kilter. In light of these many failed attempts, he recommends that in-house personnel NOT waste time and money on jury-rigged fixes. Instead, he has developed a replacement mount and a unique process to accurately position and secure a new mirror. If your laser aimer exhibits this failure, we’d love to save your staff some effort and frustration by getting it on our workbench for a precision solution.

Sometimes, the laser itself croaks out. Unfortunately, the laser unit used by the OEM is no longer available. On the bright side, the same specialist who developed the new mounting for the internal reflector also knows how to install and adjust a quality, after-market replacement laser.

Long story short; if your laser aimer problems have you feeling more like you’re in a Dilbert comic strip than an episode of Battlestar Galactica, we can help! Our workbench master has bisected, dissected, and resected countless OEC laser aimers to great effect. Check your batteries FIRST, then contact us for a quote on repairs for your OEC laser aimer.

Tim Totten is a Component Repair Technician at Block Imaging. Tim is Block’s in-house electronic components expert, repairing imaging equipment parts at the deepest level. When he’s not repairing crucial system components, Tim enjoys cycling with his family and volunteering at his church.