The Affordable Care Act and the Medical Imaging Equipment Market 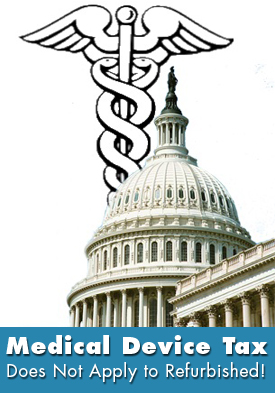 The Affordable Care Act (or as it is better known: “Obamacare”) mostly survived review by the Supreme Court of the United States with the release of the 5-4 decision today.  While a change in the states’ requirements to receive Medicaid funding from the federal government was rejected, the most controversial portion of the law, the requirement that all individuals have certain minimum health insurance (or be subject to a tax), was upheld.  The Court ruled that the Affordable Care Act (“ACA”) was a proper exercise of Congress’ taxing and spending power.

Reasonable people can disagree on whether this is positive or negative for the country, and whether this decision changes the relationship between citizen and state for better or worse, but it is the law of the land unless Congress changes it again.  While the “individual mandate” does not become effective until 2014, certain portions of the law have already begun kicking in, and others will become effective in 2013.

There is one particular portion of the law that becomes effective January 1, 2013 that impacts the medical imaging equipment industry.  This part of the ACA was not challenged in the Supreme Court, but similarly relies on Congress’s taxing power. Section 1405 of the ACA calls for a new section to be added to the Internal Revenue Code. The new section requires medical equipment manufacturers, producers and importers to charge and collect a 2.3% tax on sales of medical devices.

By “medical devices”, the Internal Revenue Code means almost anything involved in medical diagnosis.  While medical imaging equipment would certainly fall into that category, the more interesting part of the new section is that collection of the tax is limited to manufacturers, producers and importers.  That means NEW imaging equipment sales will include the 2.3% tax. Sellers on the secondary market will not be required to charge or collect the tax.

In a time where every dollar counts, an additional 2.3% tax will make an even more compelling argument to consider refurbished imaging equipment solutions. Comparable reimbursement and technology and significantly lower equipment costs have always made the secondary imaging equipment market a great option. The increased taxes (with no additional value) the ACA places on new systems enhance the relative value of finding comparable systems on the secondary market and underscore the importance of purchasers’ careful consideration when buying medical imaging equipment.

The history and potential impact of Medicare CR7502 on hospital and independently-owned imaging ...

Find out why you should take advantage of Section 179 tax deductions on qualified medical imaging ...

Find out about valuable tax incentives for purchasers of qualifying imaging equipment.