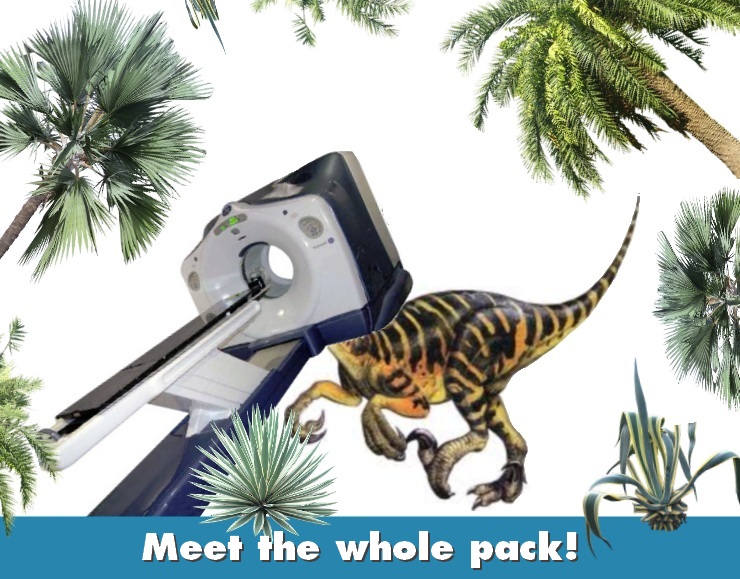 The GE Discovery family of PET/CTs is like a pack of vicious velociraptors; quick, quiet, and hunting down anatomical anomalies like so many billionaires’ grandchildren cowering behind the darkened countertops of an industrial kitchen.

Alright, so maybe paleontologists have learned that the velociraptor was likely solitary, a scavenger, and had a skull too small to contain a brain capable of strategic thought, but having grown up in the 90s, I choose to err on the side of fond childhood memories and cling to the Jurassic Park version of things. Not to mention, this is my blog. I play my analogies by my own rules.

Seriously though, the Discovery series is moving fast. In eleven years GE produced not only the original Discovery, but also three permutations. With a new version coming out so quickly, it can be hard to keep up with the changes that are being made, especially if you’re just now considering your first PET/CT purchase.

To make things easy for you, we’ve put together a brief rundown of the pack:

GE’s first generation of PET/CTs. The original was a field upgrade where a 4 Slice GE Lightspeed CT and an Advance NX/i PET were combined. No new equipment was actually built. Later an 8 and 16 slice CT were added to the line up.

The DLS series benefits from low cost and excellent PET and CT performance from the parent systems. In addition, the PET system, which can acquire 2D and 3D images, can be operated as a standalone; great for those instances where reduced dose is important – i.e. children, small organs, etc. or in the event the CT malfunctions.

Ken Smith, Executive Vice President of Sales and Service at BC Technical describes the DLS series as a “value-based system.”

“With the wide availability of parts and over a decade of system availability, these represent a great choice for the facility that wants to maximize capital while getting excellent images and treatment information,” Ken says. “The original BGO (bismuth germanate orthosilicate) detector produced high-quality, high-resolution images.”

The few disadvantages, improved upon in newer models, are a tapered bore – 70cm for CT down to 60cm for PET and the non-integrated workstation – separate PET and CT workstations with a third workstation used to combine the images.

NOTE: The DLS series is NOT recommended for use in mobile environments!

With the introduction of the DST there was no more pairing of standalone systems. The integrated PET and CT gantries of the DSTs have a smaller footprint with a full 70CM bore throughout.  In addition, redesigned BGO detector blocks provided shorter scan times through increased sensitivity but slightly reduced resolution as compared to the DLS.

The DST came in 4, 8, and 16 slice varieties like its predecessor but, with the new integrated design, came mobile-ready from the factory. ST components are engineered to handle the normal bumps and jostles of road travel.

NOTE: We are starting to see these in 2012, but be prepared to move quickly if you locate one.

The “E” in STE could also stand for “elusive”. These units are a touch too new to be widely available on the secondary market, but sightings have been reported. If you want to get your hands on one of these, it requires swift action as soon as you find one. 2D and 3D imaging, fast scan times, high-resolution, integrated workflow and mobile readiness are all reasons why these are in high demand.

The biggest change to note with these systems is the BGO detector design change. This design is a compromise between the high resolution of the DLS detectors and the increased sensitivity of the DST detectors.

In the middle of the DTSe run, the Dimension Console was introduced as an upgrade to the DST and DSTe scanners. This console integrates the acquisition and processing computers for both the PET an CT into one workstation.

“With the introduction of the Dimension, everything became easier – no need for 3 workstations to acquire PET, CT and then combine the images,” Smith says. “With features such as integrated database, list-mode acquisition and full 3D iterative reconstruction, to name a few, you get improved workflow, faster scan times and the ability to lower patient dose.”

NOTE: If you want to use Cardiovascular Imaging Technology’s ImagenPRO software for cardiac gated MPI, you’ll need one of the older non-Dimension units as CVIT does not support the Dimension at this time.

The DVCT only comes in one flavor – 64 slice. It provides ridiculously clear images and resolution. Essentially, it makes internal organs appear like Pixar animations.

There are, as of yet, no signs of these systems on the secondhand horizon. They combine all the great features of their forerunners into GE's most solid PET/CT hybrid to date.

If you have more questions about the GE Discovery PET/CT series, feel free to contact us. Our PET/CT sales reps are like a crack team of paleontologists, sifting through the medical industry’s ever-shifting sands, uncovering more and more information about the Discovery family all the time. They’ll be happy to help with any information I may have left out…

…and THEY’VE promised to do so without a single Jurassic Park analogy.

BREAKING NEWS: Bracco to Resume Shipments of CardioGen-82 (Rubidium Generators) and its Effect on PET and PET/CT Scanner Prices

Proper PET scanner maintenance can save you a bundle. Learn the most important steps to extend the ...

Buying a PET/CT Scanner? 3 Questions to Guide Your Search

Choosing a PET/CT scanner can be a tough project. Use these 3 major guidelines to begin your ...