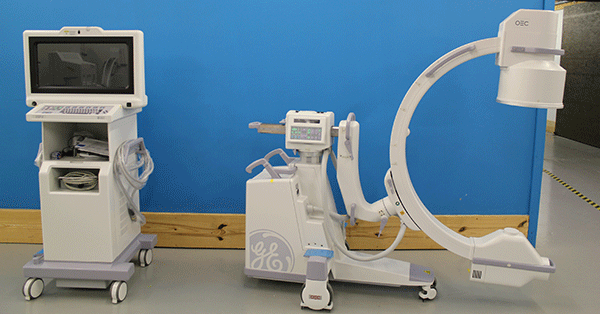 When you were new to the C-Arm market (and perhaps you still are) undoubtedly one of the first C-Arm models you heard about was the OEC 9800. Given the system’s huge popularity, this isn’t surprising. As you looked into this model more, you realized it comes in a few different flavors (metaphorically, of course; we recommend that you do NOT taste a used c-arm), including the 9800 Plus.

But “plus” what? We know that word stands for addition, but what exactly was added? Is this an auto-industry style ploy where a whole new product is created with a spoiler and some hubcaps? Or is this a 9800 C-arm “plus” features that make a big difference in the way you scan patients?

You can make up your own mind but, to help you do so, here's what we’ve learned about the 9800 Plus.

DICOM is incredibly useful and most C-Arm owners use it regularly. Unlike the original 9800, the 9800 Plus comes with DICOM built in through an ethernet PCB board that connects directly to your PACS system.

Before the release of the Plus, 9800s required the DICOM box accessory. At this point, however, most 9800s on the market have onboard DICOM.

It is worth noting, though that most systems with DICOM have access to a PACS network for storage. Unless a C-arm is used constantly at massive volume, there is no need to store images onboard that could be sent to the network, especially at quantities in the hundreds.

Our intent is only to help inform your purchasing decision, but we feel that the OEC 9800 Plus is largely a rebranding of the 9800. When it was initially released there were upsides to the model, but all of them are now available to owners of any 9800 system. Chances are, if you had your 9800 under service contract, you received many of the upgrades already. Some of the software upgrades were even mandatory during the 2007 FDA shutdown.

There will be scenarios where buying a 9800 Plus will make sense, after all, there are a good number of them on the second-hand market for reasonable prices, but don’t let yourself be misled: the 9800 Plus is NOT radically different from other 9800 C-arms.

Motor-driven C-arms have advantages in patient positioning, but which one is right for you? Learn ...