How to Extend the Life of Your Toshiba Aquilion CT Tube 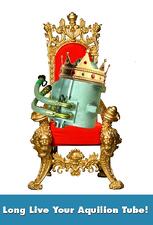 The X-ray tube is the single most expensive consumable part on a CT. In a way, the tube is the top dog, the big cheese; the king of the CT kingdom. Because of this, it makes sense to gear one’s preventative maintenance toward extending tube life. In the case of Toshiba’s reigning CXB tube series, we’d like to recommend a few things to help your site shout, “Long live the King,” and really deliver on it.

Generally your Aquilion tube should easily reach a 500,000 slice count, while counts nearing 1,000,000 slices are not unheard of on the high end. So why would a tube fail much earlier than that? There are a number of reasons, but the most common, especially for systems with replacement tubes, is that the cooling system has been compromised.

The Toshiba Aquilion family of CTs uses a Varian tube design that has some exceptional engineering characteristics. In terms of X-ray tube life, the main feature is efficient removal of heat from the tube. In a maintained system, this characteristic gives long tube life.

The Root of Temperature Evils

Air in the heat exchanger pump- this will lead to a slowing or outright stoppage of coolant flow. This also means there is air in the tube, which will limit normal heat transfer.

If the tube is generating X-ray, heat energy is being produced and absorbed in the tube. When problems in the exchanger pump slow or stop cooling, the heat continues to build rapidly.  The parts affected first tend to be the rotating components, which then affect other portions of the tube in a chain reaction. Just like living under a king who gets bad advice from a dysfunctional Prime Minister, this chain reaction often proves to be of extremely annoying and wallet-harming proportions.

Luckily, as a safeguard against this, Toshiba CXB tubes are equipped with a thermal sensor. When the thermal sensor is tripped, it’s an indication that the cooling system is failing. This is a sign that it’s time to let the king rest from his numerous affairs of state, such as looking at bones and guts. Stop firing x-ray for a while!  Please note though, that the heat already “in transit” will cause a temporary rise in temperature afterward.

The weakest link in the Aquilion tube cooling loop may be the cooling line quick-disconnects. These tend to leak when separated, allowing fluid out and air in. Coincidentally, this is also the weakest link in my royal analogy. I think I’m going to settle for calling these disconnects a… sniveling Baron?

The best help for cooling system health is to purge/recharge (P/R) the cooling system at each tube change. After all, an heir to the throne deserves a fresh advisor, right? A heat exchanger P/R is an effective way to remove excess air from the exchanger coils. This is not normally done, partly due to cost, time, and lack of awareness, but is an added measure that can yield great results for proper cooling.

There are two P/R options:

-Varian will purge/recharge the heat exchanger for a relatively nominal sum, but you’ll need to send the unit out to them.

-There is a purge kit available from Varian that can be used on-site by service engineers. This measure is helpful, but will not yield the same quality results as a full P/R.

If a P/R isn’t enough and a replacement is necessary, Block Imaging offers the option to buy a purged/recharged heat exchanger on exchange. When replacing a tube or heat exchanger we recommend a P/R of the component you aren’t replacing. If the tube is being replaced, P/R the heat exchanger, and vice-versa. When purchasing either of these components, be sure to ask if the cooling fluid has been recharged.

For the future, monitor your system for thermal warnings from the tube or the heat exchanger. Tube “over-temp” errors are an indication the cooling system is not working and needs immediate attention. Heat exchanger errors may be serious but also may be caused by air bubbles on the pressure sensor. The latter would likely be seen intermittently and without tube “over-temp” errors. The former would likely occur consistently, and with corresponding rises in tube temperature.

If the worst happens and your tube fails outright, there are providers you can turn to for affordable CXB tube replacements

Just like the rulers of old, your CT King’s worst enemy could also be his closest friend: Prime Minister Heat Exchanger. For longer tube life, make sure to keep close tabs on both of them, or your tube may be asking, “Et tu, Brute?”

Keith Rumley is a CT Engineer at Block Imaging. He takes great pride in making sure every refurbished CT that leaves Block Imaging produces outstanding images. Since high school, he has loved all things technology and electronics (hence the career choice). Keith is happiest when he is engaged in technical problem solving.