Will You Be Able to Get a CardioGen 82 Rubidium Generator in 2012? 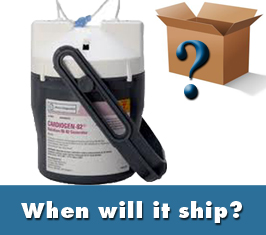 I have been wrong before (see earlier post about the rubidium shortage where I expected everything to clear up by August 2011). But as I like to say, “I always think I’m right, however, I don’t think I’m always right.”

I broke the first iteration of this news via the Block Blog and LinkedIn regarding the possible re-entry of Bracco’s CardioGen Rubidium generators.  At the time I was called “euphoric”, “imprudent” and "premature".

Another Announcement From BRACCO

As has been reported in various news sources last year, two patients reentered the US in July after having undergone scans involving a rubidium generator manufactured by BRACCO Diagnostics.  When they arrived and walked through a radiation scanner at the border, they set off alarm bells.  Homeland Security reported them to the FDA.

Citing these two patients who received “more radiation than expected” (yet still “minimal”) the FDA requested that BRACCO do a voluntary recall of all their generators, which BRACCO did.

For the last 6 months or so – there have been no generators loose in the wild.  No one was doing gated myocardial perfusion scans on a PET, unless you happened to have your PET scanner located very close to a cyclotron (see my earlier post about the N13 alternative for PET scanner cardiac studies).

So When Are the Generators Coming Back?

Officially, tentatively, provisionally, they are coming back to existing customers in Q1, 2012. Here’s a letter from BRACCO dated December 29, 2011. According to the letter – the FDA has “expressed support” for their “controlled and phased reintroduction” of the CardioGen generators.

However, if you look at this letter from another perspective, it didn’t contradict any of the proposals from BRACCO’s earlier letter.

So I’m going out on a limb here, I think we are looking at a mid-2012 availability for new generators for new customers.

Remember what I said at the beginning about thinking I’m right?...

What do you think?

Rubidium Shortage Got You Down? The N13 Alternative for PET Scanner Cardiac Studies

BREAKING NEWS: Bracco to Resume Shipments of CardioGen-82 (Rubidium Generators) and its Effect on PET and PET/CT Scanner Prices

What Is 'Time of Flight' PET Scanning?