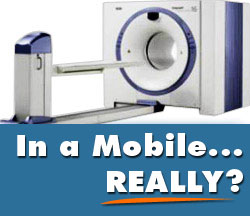 Before I reveal how to make a Siemens Biograph 16 into a Mobile PET/CT, let me first explain why everyone else will tell you, "It just can’t be done."

The Siemens Biograph 16 PET/CT is hybrid of a water-cooled PET scanner with lutetium oxyorthosilicate (LSO) detectors and a CT. However, unlike GE’s Discovery or Siemens’ 2 and 6 slice CTs, the Siemens 16 slice Sensation CT is water cooled and requires a separate chiller.

Problem 1: Too many components – not enough space

There are two significant obstacles to making a Biograph 16 into a mobile. The first is logistical. There is not enough room on the trailer for two large chillers, the system, the control room, and the extra power cabinets that the Biograph 16 uses, and the hot-lab.

The Biograph 16’s large Kraus chiller has to be situated outside the coach to be able to exchange heat. This could be placed on a concrete pad next to the coach or under the coach albeit at an additional cost. The Power Distribution Cabinet (PDC) is a tall rack compared to the smaller PDC on the Biograph Duo and 6. The Water Distribution Cabinet (WDC) is obviously not necessary on the air-cooled Biograph Duo and 6 (with air-cooled Emotion CTs).

But for the Biograph 16, you need both components which now fit perfectly in the space formerly known as the hot lab. So while you could feasibly keep the actual hot lab components in the space, there wouldn’t be room for the typical reclining chair - especially not for anyone with a hint of claustrophobia.

The second issue is functional. Dan Kaman, owner of Knoxville-based Molecular Imaging Solutions, says, “The Sensation-series PET/CTs are especially sensitive to misalignment. This is not a problem if the systems are anchored to a floor that does not move. But if it drives over the road, it’s going to get out of alignment.”

At Block Imaging International, we like to think out of the box, so we’ve kicked around, er, studied, a number of ideas – including, but not limited to, a “chase vehicle” with a mobile hot-lab in it, installing a CT chiller at every site with quick disconnects, and mounting the CT chiller on top of the coach. While these ideas solved the various logistics issues, they were ultimately impractical, not approved by DOT and failed to solve the functional problem.

SOLUTION: Question assumptions. What if the trailer doesn’t move much?

If the trailer doesn’t move much, the CT chiller could be installed on a cement pad outside the trailer. The system, once aligned, doesn’t go over speed bumps or get jostled on Michigan roads and require realignment.

But that’s not a Mobile!

I beg to differ. It’s more mobile than a true fixed system. It comes with its own means of moving. You would just have to take into account the cost of aligning the system and relocating the chiller each time it moved.

This is still not an ideal situation for daily, weekly or even monthly moves, but for longer periods – with no construction build out costs, the expense of moving the CT chiller and the realignment could be quite reasonable.

Your average cost for removal, rig out, transport, rig in and reinstall of a true fixed system ranges from $75,000 to $125,000 plus construction costs. On the other hand the cost to move the coach, CT chiller and realignment from one coast to the other ranges from $10,000 to $20,000 - definitely much more economical.

The Big Question: Has it ever been done before?

Yes, it has. Three times, to be exact. All three projects were successful, some still in use. All three were performed by Dan Kaman’s Molecular Imaging Solutions, one of Block Imaging’s most trusted deinstallers and riggers for Siemens PET/CT scanners.

Is a Biograph 16 “Fixed Mobile” right for you?

Perhaps. If you don’t have the office space, but you have the need for a Biograph 16 that doesn’t need to move much, then let’s talk. We may be able to find a way to get you the capacity you need.

So if it’s not a true mobile, but it’s not a fixed system, what do you call it?

Josh Nunez is the Product Manager for Molecular Imaging Equipment at Block Imaging. He is also a husband, father of 5, athlete, and literature and photography buff. Josh is energized by developing an understanding of each customer's unique imaging needs and overcoming the challenge of helping find them the perfect equipment match.