Pencil vs Fan Beam Bone Densitometer: Which One is Right for You

Without a doubt, Bone Densitometers (Bone Densitometry, BMD or Dexa) are the most underutilized imaging modality today. Did you know that the incidence of osteoporotic fracture in women is greater than that of breast cancer, stroke and heart attack combined? 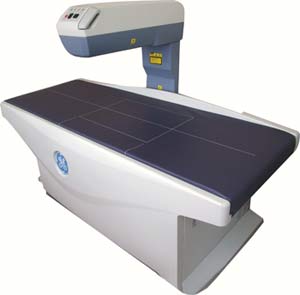 As you consider adding DXA or replacing your current system, consider the three different methods of scanning and the factors that differentiate each one from the other:

Pencil Beam DXA uses a singular beam of X-ray to produce an image and is the first and original method. This method uses a single detector as the X-ray tube scans across the measurement region. Although the pencil beam is considered the gold standard for precision, the scan time is increased due to travel time for the single beam to cover the body. The pencil beam is an excellent choice for practices that are scanning fewer than 15 patients per day. The GE Lunar DPX Duo and GE Lunar DPX Bravo are great examples of pencil beam DXA systems.

Fan Beam DXA (wide angle fan beam) was introduced in the early 2000’s as an alternative to pencil beam. The X-ray tube emissions are received by multiple detectors which are swept across the measurement region. While the downside is minimal image distortion due to magnification of the tissue, fan beam systems provide for shorter scan times. The Hologic Discovery Series all use fan beam technology.

The final method, often referred to as third generation DXA is known as Narrow Angle Fan Beam (or Micro Angle Fan Beam). This technology was introduced exclusively by GE Healthcare, beginning with their Lunar Prodigy line in 2004. Although still a fan beam, the narrow-angle uses multiple passes to acquire multiple images. Image reconstruction compiles these images to mesh the precision of Pencil Beam and the speed of a Fan Beam system. The GE Lunar Prodigy Primo and Advance are third generation systems that are recommended for practices scanning more than 15 patients per day.

Please let us know about your experiences and preferences as to specific systems and models, along with any questions you would like answered about Bone Density Equipment. We have brand new, certified pre-owned and refurbished options available to best match your facility’s specific needs.