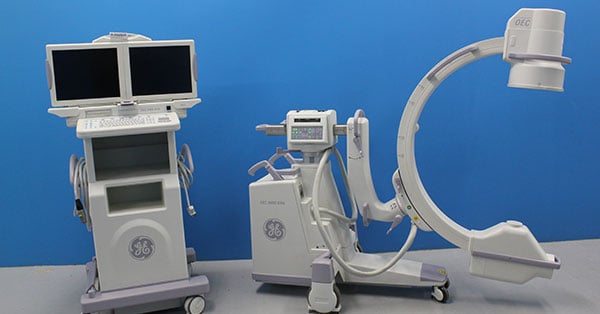 OEC lists 51 items (assuming you consolidate the image preset options –more on that later) describing the OEC 9900 C-arm in their technical data brochure. That's a lot of features with, potentially, a lot of chances to show you that the 9900 is a better machine than the OEC 9800. However, on the more pragmatic side of things, the OEC 9800 is more common, more affordable, and well-proven as a workhorse in its own right. So, how do these two C-arms really stack up side-by-side? Take a look at the graphic below to see for yourself, or keep reading for a summary.

Of the aforementioned 51 descriptors, 44 of them are the exact same as the 9800. For you math nerds, that is an 86.2% overlap. That being said, it’s probably faster to say what is different.

Being that the 9800 is extremely similar to the 9900, it really only "wins" in one area: price point. Of course, this means that many of the same tasks one could perform on a 9900 (especially tasks that use the GSP or ESP software platforms) can be done on a 9800, and for a lower capital expense.

In the Long Run:

There are compelling reasons to consider both of these systems. The choice of which one is better will come down to the individual facility. But, if pressed for a recommendation either way, we might say:

For more information about the OEC 9900, the OEC 9800, or other C-arm models, contact us to speak to an expert or check out our C-Arm resources page.

Side-by-side comparison of the features and user experience of the OEC 9800 and the Genoray ...