Used GE MRI for Sale? Read This Before You Sell 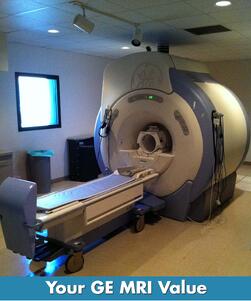 In 2012, 37 baseball cards were discovered in an Ohio attic – untouched for 100 years. They fetched over $500,000 at auction and made an Ohio family very happy. Like anyone who doesn’t deal in baseball cards every day they went through a process whereby 1) they thought they had something of value 2) they had the cards expertly graded and 3) they consulted a company who specialized in sports memorabilia to handle the sale. Every step in that process is important. It still pains me to remember that I traded my entire baseball card collection about 30 years ago and got very little in return. I don’t really want to talk about that...

But if you are considering trading your GE MRI system back to the OEM or perhaps listing it on DotMed or throwing it open to the highest bidder at auction; STOP! Do you really know what you have? Do you know the features that most buyers around the world value? Do you know the best way to take it to potential sellers? Block Imaging has bought and sold hundreds of MRIs over the last 10 years and we’d like to share a few things that you might want to note before you “list” your system. The good news? There are fewer value drivers than you might think

The magnet can attract (or repel) potential buyers

What type of magnet does your GE MRI have? If you don’t know, don’t worry – first look to see if it's round or square. If it's square, you’re most likely looking at scrap metal, but if it's round, you at least have technology that’s still in use. It's that simple – the round magnet is a CXK4 and, as such, your GE MRI has value on the secondary market. If it's square, then read on. The rest of the electronics might have some value!

Gradients remain a key value driver for MRI systems. GE makes these relatively easy to identify as they describe their systems as Smartspeed, HiSpeed, and Echospeed (and Twinspeed as well). If you know which one of these packages you have, that’s great! Hint: it's usually found in the original quote that GE gave you when they first sold the system. Gradients are rarely upgraded and it's very likely you still have the same set-up. If you don’t know and/or can’t find the original quote, go to the configuration tab on your operator’s workstation. It will typically list gradients as a 4-digit number like 8651, 8915, 8916, etc. 8915 and 8916 are the two that have value. 8915 is ACGD (AKA Echospeed Plus) and commonly found on LX systems. 8916 is HFD, most commonly found on the newer EXCITE systems. If it's not one of those two numbers, you probably have an older package. If all else fails, just look at the label on the gradient cabinet itself. If you have two cabinets it's either a Twinspeed, which is "ok" or you have a GRAM cabinet which is OLD.

GE is EZ – if it's 8.3 or lower, the value is going to be, well, lower. The other levels and their “GE platform” are as follows. Each software revision carries associated upgrades that drive the value up as the numbers go up (in the neighborhood of $50K per step).

9.1 = LX – usually 10 years or older – this can still have value, but most customers are upgrading, or have already upgraded, from this platform

14 = EXCITE HDX – many of these have been upgraded to HDXT, but they are still a high-value GE MRI

14 = EXCITE HDe – most commonly seen in Asian markets, these have fewer features, a smaller footprint, and a 50 slew rate

15/16 = EXCITE HDXT – this is the latest version of EXCITE and the highest-valued GE MRI on the secondary market – can be 15 or 16 level software and many have 16-channel coils – most notably the 16-channel Head, Neck, and Spine unit – if you have one you’ll know it – they are big

Giving the basics above will allow a seller to assign a value range to your GE MRI and get to work on placing it in a new and loving home. You'll also need to compile a coil list and be sure to include which (if any) are 8 or 16-channel. This will allow for an even more accurate value.

And here’s an interesting note: the Grandfather in Ohio who originally owned those baseball cards- he actually GAVE AWAY most of his collection along with beef sales at his meat market and just stashed the extras away. Don’t be that grandfather and don’t leave value on the table – click the button below and let us help you. We do this every day and even if we can’t buy it, we’ll be happy to get you a value estimate.