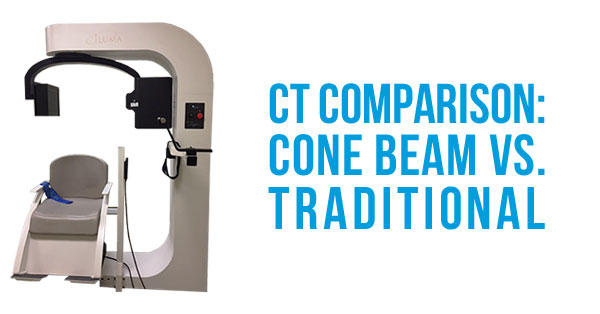 When you think of CT scanners, you usually think of the GE Lightspeed, the Philips Brilliance, the Siemens Sensation, or the Toshiba Aquilion. You think 4-slice, 16-slice, or 64-slice. You think of large machines taking up an entire room and scanning patients from head to toe as they lie on a table.

Now, however, CT is much more than that. We're going to break down the differences in technology and applications between the CT scanners you generally think of and the more specialized cone beam CT (CBCT).

Looking for a quote on a cone beam CT? Click here to tell us your preferences and get pricing.

CBCT is a variation on traditional computed tomography (CT) that is on the rise. Unlike traditional CT scanners, in CBCT an X-ray tube and detector panel rotate around the patient capturing data with a cone-shaped X-ray beam instead of the “slices” CT scanners are typically known for.

The data received from these systems is used to reconstruct 3D images predominantly in the following specialties:

While both standard scanners and CBCT fall into the computed tomography category, there are some big  technical differences between them. The excerpt below from dentistryiq.com1 gives the details on some of the most significant:

Traditional computerized tomography records data with a fan-shaped X-ray beam onto image detectors arranged in an arc around the patient, producing a single slice image per scan. Each slice must overlap slightly in order to properly reconstruct the images. The advanced cone beam technology uses a cone-shaped X-ray beam that transmits onto a solid-state area sensor for image capture, producing the complete volume image in a single rotation.

The single-turn motion image capture used in cone beam tomography is quicker than traditional spiral motion, and can be accomplished at a lower radiation dose as a result of no overlap of slices. This type of imaging exposes a patient to less radiation than traditional CT scanners.

CBCT and the Secondary Market

Use of CBCT systems, especially among dental professionals, has increased significantly across the United States. The number of systems installed and the number of scans conducted has shot up dramatically in the last few years. By way of example, the rise of CBCT in Block Imaging's home state of Michigan recently prompted professionals across the state to (successfully) petition their Certificate of Need Commission to exempt the modality from regulation.

As CBCT continues to mature as a modality and gain popularity among practitioners, used systems are seeing more availability on the secondary market. If stepping into CBCT is something you're hoping to accomplish in the near future, we'd love to start a conversation about how you can do this more affordably. Use the button below to tell us about your project and get a quote.

If you are looking to upgrade your CBCT and need to find a home for your existing system, we can help with that too. Let us know what you've got!

On the CT scanner market for the first time? Check out this quick guide to common CT scanner ...

The 3 Most Difficult CT Scanners to Service

Image quality & capabilities are priority considerations in CT, but what about good service & parts ...