It's probably obvious to most people that if something runs on batteries, those batteries need to stay charged to keep that something from shutting down. GE AMX portable X-ray systems are certainly no exception to this, but what may not be so obvious is what else can happen to them if a sufficient charge is not kept on their batteries.

We're going to share with you why you should never run your AMX batteries too low, what the consequences are if you do, and best practices to keep your batteries where they need to be.

What happens if my AMX batteries run low?

First and foremost, as you might be able to guess, running your AMX batteries out means the system will not have enough power to generate X-rays and will be unavailable for use until it's recharged.

Beyond that, however, you should be aware that, sometimes, when a battery set is run very low it may not even accept a charge when you plug it back in. When this happens, the system is out of commission until a field engineer can arrive to service and recalibrate it. 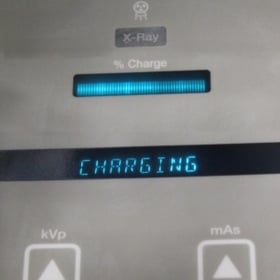 To keep your AMX powered for scanning and able to accept recharging, there are two simple rules to follow:

1. If you're not using the system, it should be plugged in. Even if your AMX is parked and switched off, it should still be plugged in. The system doesn't necessarily need to be scanning or driving to "use up" its charge.

2. Keep an eye on the battery meter (just above the mAs and kVp controls on the right side of the system). If the meter gets down to about one-third power, it's time to start thinking about driving it back to a place it can charge. We'll admit that this is probably on the conservative side, but it can also save you a sizable sum of both money and hassle.

If your AMX isn't charging, or if your AMX batteries are closing in on their next replacement interval, our Service and Parts Teams are here to assist. Use the button below to tell us how we can help you with your portable X-ray equipment and parts needs

The three reasons we believe Siemens Aera 1.5T provides the best in clinical capability among ...

Learn about the three types of used x-ray tubes and which is better for your x-ray equipment or ct ...

Veterinary X-Ray Equipment: 3 Things to Consider Before You Buy

If you're in the market for veterinary X-ray equipment, these are three crucial elements of a vet ...